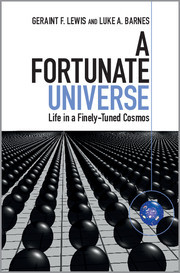 A Fortunate Universe: Life in a Finely Tuned Cosmos by Geraint F. Lewis and Luke A. Barnes is a book about the cosmos for those looking for a bit more than a Discovery Channel series on the universe. Lewis is a Welsh astrophysicist, who is best known for his work on dark energy, gravitational lensing, and galactic cannibalism. Barnes is a postdoctoral researcher at the Sydney Institute for Astronomy, University of Sydney. He works on cosmology, galaxy formation, and the fine-tuning of the universe for life.

The universe has gotten a lot more complicated over the years, but much more accessible. Science shows on television, the internet, and since the 1980s, science books that were not just filled with equations. Einstein used thought experiments as well as Schrödinger. Feynman used diagrams to represent extremely complex mathematical equations. Stephen Hawkings had a best-selling book on science (with only one equation). I remember reading a non-mathematical Quantum Mechanics book back in the mid-1980s that opened up a whole new world to me. The popularization of quantum mechanics and cosmology allowed people with an interest in science to follow along and grasp the post-Newtonian universe.

Lewis and Barnes discuss the universe with all the familiar forces and particles. They, however, look at how our universe is “tuned.” They examine what small changes in forces and particles achieve. What would happen to the universe if the strong nuclear force and gravity were at different values? Could stars form? What would their lifecycles be like? Radiation is a serious problem for living beings, but would a universe without radiation support life? The earth would just be a cold dead rock. Radiation keeps the core hot and the magnetic field active. Perhaps the most important aspect of life in the universe is carbon. Carbon is formed inside of stars but by much more than simple fusion.

My background is not in science but I could follow along fairly easily throughout most of the book. There were a few places that I needed to reread or lookup in an external source but, for the most part, the writing was very understandable. The explanations are complete and understandable. Personally, I tend to forget how the weak nuclear force works, but I came away well informed. The writing style is engaging and thought provoking, and although the workings of the universe make rocket science look like child’s play, the writer’s can be entertaining. They also like to drop musical references in their writing.

In addition to what we know about the universe and what changing a variable might accomplish the book discusses what we don’t know and some problems with what we don’t know. The authors tell what happens when theories get stretched too far. In one place the authors discuss the number of 10^120. It’s large number so large in fact that it is nearly impossible. Impossible many times over when discussing the number of protons in the universe. Higgs, dark matter and dark energy, as well as singularities, are part of the discussion and keep the writing current. The authors start and end the book in a discussion format. It provides a good introduction and closes the book well taking in a final discussion of if the universe is so tuned for life could it have been created or designed. A particularly well-chosen closing to what very much seems like a Goldilocks Universe.