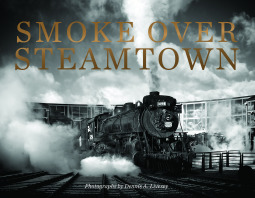 Smoke Over Steamtown by Dennis A. Livesey is an intimate look at the Steamtown Historical Park and workers there. Steamtown is a sixty-two-acre reserve, near Scranton Pennsylvania, dedicated to preserving the historic trains. The park offers tours and train rides in a historical setting. Livesey takes his camera through the park and captures nearly magical photographs of the engines and the people who keep them running. One look at the complexity of the plumbing and gauges and the reader can easily see where the genre of steampunk originates. We think current electronics are complex but a look at the cab of a steam engine will have the reader reconsider his previous notion if simpler older times.

The trains themselves are works of art captured by the camera. The scenery just adds to the art — A pitch black engine breaking through a blizzard. The pictures are not just limited to the stately, but also the fireboxes, emptying the ash, cleaning the boiler, and greasing the moving parts. The people who keep the trains running are shown at work from the mechanics to the conductors. There is enough text to present an adequate and personal background. It is, however, the pictures, that makes this book come alive. A perfect coffee table book for the train enthusiast.