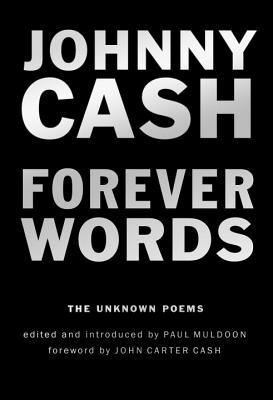 Johnny Cash is a man who needs little introduction. Even in my “only Rock and Roll” youth on the east side of Cleveland, I knew who Johnny Cash was and could instantly recognize his voice on the radio. I didn’t know much about the man. He had that Christian front and an outlaw image. Forever Words starts with an introduction that covers nearly one-third of the book. His outlaw image really worked as the man in black and also as a man who never served a day in prison. He read and re-read The Decline and Fall of the Roman Empire and the Bible. Christianity was more than just a front. He also wrote a novel called The Man in White about the struggles of early church leader Paul (Saul of Tarsus).

The poetry is accompanied by photos of handwritten poems. Reading the poetry was easy. The language is plain and simple and covers easily understandable topics. The one problem I had, if it can be considered a problem, was reading the poems as lyrics in a voice that sounded deep and baritone in my mind. It’s hard not read the poems in that distinctive voice. It is country music poetry more so than Patti Smith or Jim Morrison is rock poetry.

There is humor in some of the poems such as trying to get his wife to wake up by telling what the president is doing or a call to go dove hunting. She is unresponsive to both so he tells her that Roy Rogers and Dale broke up and the next thing he hears is her running to hear the news. He shows his understanding of history with a poem about Tecumseh and religion with a poem on Job. The poems date from the 1940s through the 1980s and although very similar in style the topics cover a great range. I very good collection with an excellent introduction.