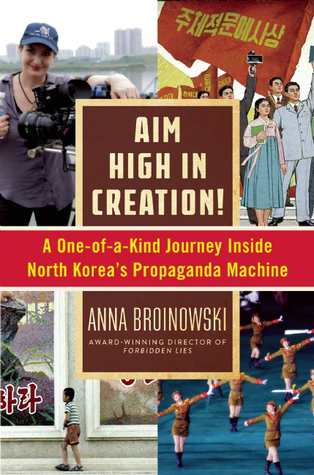 Aim High in Creation!: A One-of-a-Kind Journey inside North Korea’s Propaganda Machine by Anna Broinowski is an Australian filmmaker’s experience in North Korea. Broinowski fell into filmmaking by accident – when she uncovered Japan’s queer, bikie, and Otaku subcultures in cult hit, HELL BENTO!! She’s been working as a director/writer/producer ever since. Her last film, FORBIDDEN LIE$, about hoax author Norma Khouri, was one of the top ten highest grossing Australian theatrical docs of all time. She was born in Tokyo and grew up traveling across Asia as a daughter of an Austrailian diplomat.

I have read several scholarly books on North Korea over the years and over time the information begins to repeat. There is a limited knowledge of what goes on in North Korea and, for that matter, what has happened in the past. North Korea is unique among nations. The US and Cuba had been enemies for years and both countries political systems fed off the mistrust and hate. But, in Cuba, many still know and remember capitalism. North Korea is closed off to such an extent that the people there believe they are the second wealthiest country in the world trailing only China. Aid from the West particularly from the US is passed out as war reparations from the vanquished Americans. Kim Il-Sung was a child of missionary trained protestants, a background he used to create his own state religion with himself as the savior. His son Kim Jung-Il was a talented cinematographer and propagandist. North Korea is a country controlled by its government’s ability to entrap its population in a perverse Disney-like “reality.” Those who look behind the curtain are sent to prison camps.

My first thoughts were this is going to be an excellent book. Here is a Westerner allowed into the propaganda center of the country and this will be interesting and possibly enlightening. Broinowski starts her story with coal seam fracking in her hometown and decides to fight the corporate propaganda by making a movie about it. She turns to the North Korean professionals to help her make the movie. Despite difficulties, she gets a visa and permission to meet and work with leaders in the North Korean movie/propaganda industry. There is praise and discussion of Kim Jung-Il’s cinematography methods and earning the trust of her North Korean minder and the directors. There is a bond that develops between the author and the North Korean professionals. They help Broinowski make her anti-fracking film in North Korean style.

In reading the preview for the book, I noticed it was made into a Netflix movie. I started the movie and found it to be more of a slapstick mockery than a serious look at the North Korean propaganda machine. The book, however, offers a few good points and bits of new information. One point that is left out is that although North Korean directors have a free hand in their movie making and do not have to listen to investors and sponsors, there is little doubt what would happen to a filmmaker who made a movie that was unfavorable to the regime. Broinowski had great potential to do some serious work in an area of North Korea that has not been opened to the West. Instead, I found her book to be light. My background is political science and as mentioned I have read quite a bit on North Korea. This book may be of more interest as a film study book than to those interested in the workings of North Korea and its propaganda machine.