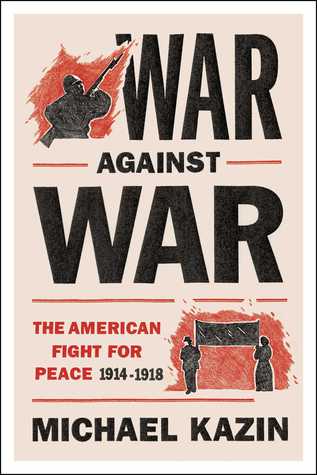 War Against War: The American Fight for Peace, 1914-1918 by Michael Kazin is a study of American opinion of the war in Europe. Kazin is a Professor in the Department of History. He is an expert in U.S. politics and social movements, 19th and 20th centuries. His most recent book is American Dreamers: How the Left Changed a Nation, which was named a Best Book of 2011 by The New Republic, Newsweek/Daily Beast, and The Progressive. He is editor of “Dissent,” a leading magazine of the American left since 1954.

World War I was a war that was half a world away to most Americans. Fifty years earlier America was fighting its own war which cost 620,000 lives. Losses and carnage were still fresh in many minds and losing lives in a far away land was not a priority for most. The European war presented complications for many. Today’s seemingly easy answer of the Allies was not clear then. America’s Irish immigrants opposed Britain over home rule. German-Americans would hold some loyalty to the fatherland. The idea of hyphenated Americans is not a new thing. Many Americans held their old country’s identity. When I was going up in the 1970s neighborhoods were identified by their nationality. Immigrants tended to settle with their own kind and kept it as an identity.

Wilson positioned himself in varying degrees of neutrality voicing support for trade and the rights of neutrals. German u-boats and submarine warfare were the most publicized but little was said of British restrictions against American trading with Germany. Britain effectively blockaded Germany from the beginning of the war. In addition to the blockade, Britain imposed a comprehensive contraband list that nearly eliminated US trade with Germany. US industry was as unhappy with Britain as it was with Germany’s submarine warfare.

Many groups in the US opposed the war such as the socialists who saw the war as being fought for the bankers and the rich. Women’s groups opposed the war as it would be their sons who would be dying. Even expanding the size of the military was not a popular idea. Teddy Roosevelt was perhaps one of the most outspoken voices for siding with Britain. As much as many people despised the German actions few believed it was worth fighting for. Wilson’s ability to keep America out of war is seen as the reason for his very narrow victory in the 1916 presidential elections. Almost exactly five months later Wilson asked congress to declare war on the German government.

The tide against the war seemed to disappear but very cautiously. The draft was brought up as volunteerism rather than conscription. Those speaking out against the war were silenced. The Espionage Act of 1917 was enacted to prevent interference with recruiting or military operations. Thousands of antiwar protesters were tried and convicted under the Espionage Act. The most famous of these being Eugene Debs. Chrisitan pacifist inductees were also court-martialed and sentenced to prison. Many civilians were arrested for not having their draft cards with them.

The war no one wanted to fight suddenly turned into the war that was illegal not to support. Kazin gives a detailed study of the social currents leading to America’s entry into World War I and the changes that would have the country as a whole. The sudden change from neutralism to war was without a major incident. There was no Pearl Harbor, Concord, or Ft. Sumpter to trigger the war. The US simply slipped into the war and afterwards slipped into deep isolation.