Book Review — In the Clouds Above Baghdad, Being the Records of an Air Commander 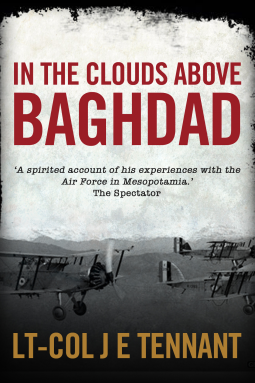 When Americans think of WWI most think of the Western Front. A few can name details of the Eastern Front, even though this is where the war started. Not many know that the war was also fought in the Middle East. The battles on this front were between the British Empire and the Ottoman Empire (with German support). The Ottoman Empire was in steep decline at the start of the war and its weakness allowed less than full support of the native populations. The British were seen as liberators to many people. It was also known that the British would not attack the women and wantonly murder the population. The British were seen as safe compared to the Ottoman.

Tennant gives a very British, matter of fact, telling of his time in modern day Iraq. One item he makes a point of repeating many times over is that it was hot. Heat seemed to be a bigger threat than the Ottoman army. The men were not the only ones to suffer. The planes had a rough time in the desert the sun destroyed the dope on the fabric and the infrequent rains would soak in and destroy the wood. Engine seizures were common on both English and German planes. Most missions were pushed back to cooler times in the day or night. The open desert made bombing missions more common than in the European theater. Tennant writes of dropping bombs on troops and pack animals. The carnage is described in unsensational terms.

The day to day coverage of the war and the taking of Baghdad by the British is very well done. Tennant gives a personal touch to the writing. He admits that he is not much of a writer, but the telling of the events seems almost conversational. The book was written only two years after the war and the events were still fresh in Tennant’s mind. One of the best memoirs from World War I that I have read.

One response to “Book Review — In the Clouds Above Baghdad, Being the Records of an Air Commander”