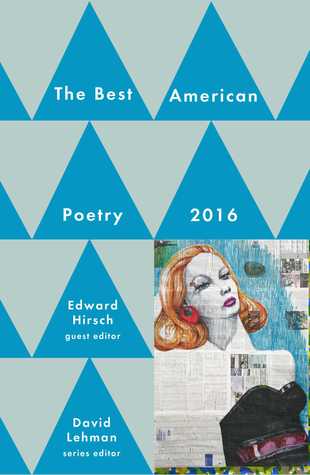 Best American Poetry 2016 edited by David Lehman and Edward Hirsch is the 29th annual edition of American poetry. In 1994, Lehman succeeded Donald Hall as the general editor of the University of Michigan Press’s Poets on Poetry series, a position he held for twelve years. In 1997, he teamed with Star Black in creating and directing the famed KGB Bar Monday night poetry series in New York City’s East Village. He has taught in the graduate writing program of the New School in New York City since the program’s inception in 1996 and has served as poetry coordinator since 2003. He has edited The Best American Poetry Series since 1988. Hirsch is an American poet and critic who wrote a national bestseller about reading poetry. He has published nine books of poems, including The Living Fire: New and Selected Poems, which brings together thirty-five years of work, and Gabriel: A Poem, a book-length elegy for his son that The New Yorker calls “a masterpiece of sorrow.” He has also published five prose books about poetry.

There are two events I look forward to every year — The Iowa Poetry Prize winners and Lehman’s Best American Poetry. As an anthology, it is wide-ranging in subject and style making it a book of discovery and also a book that gives the reader boundaries for his or her taste. This is not a collection where the reader will enjoy every poem, but it is a collection that has something for everyone. In Lehman’s introduction, he tells of how poetry is a reflection of the times and the times are not good. There is terrorism, environmental destruction, and a constant stream of doom being reported. There is also a diversity in this collection that reflects a change in America. There are poems from Asian and Indian perspectives adding to the traditional melting pot.

Two poems, in particular, jumped up and rattled my brain. “Humanity 101” by Lynn Emanuel deep in satire and real world reflections of Humanity and Remedial Humanity as college courses. Is that how far we have come as people, needing to learn what it is to be humans? Of course, even in the instruction it is filled with the same warped sense of perceived reality that people believed putting a magnet on their car was supporting the troops, but when physically and mentally broken troops returned home needing help they were quickly forgotten. That poem struck deep. In the same sense “The Lady Responds” by Linda Gergerson on the surface seems to show how lightly we treat animals, especially in emotional and physical cruelty. A little closer look at the dedication “after Sir Thomas Wyatt” and the opening line “Whoso list to hunt…” It is a response to Thomas Wyatt’s poem about Anne Boleyn where the deer (Boleyn) he wants cannot be had because it’s on Caesar’s land (king’s wife) so he can no longer hunt. Gergerson’s reply is concerning the dogs that hunt, cannot behave, and those that are live bait for bears. Extremely well done on two levels.

Also in this year’s edition is a high percentage of prose poetry and free verse, much more than I remember in previous editions. Most are very good but still many may question if it is really poetry or a vivid short story. There is no doubt that prose can be poetic but is it poetry? That is for the reader to decide. There are plenty of more conventional poems in the collection for the traditionalists. Best American Poetry 2016 is a good indicator of the direction of American poetry. It reflects the changes in society both good and bad and how America is seen from the inside. Although Lehman warns of the apocalyptic feelings of the times there is hope and lightness still to be found in American poetry.