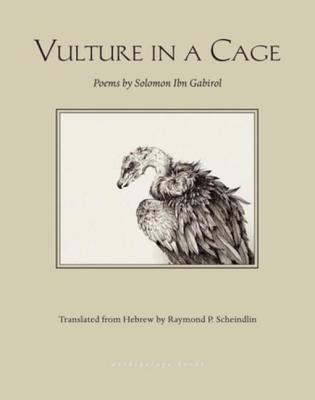 Vulture in a Cage: Poems by Solomon Ibn Gabirol translated by Raymond P. Scheindlin is the first time these poems are presented as a collection. Solomon ibn Gabirol was an 11th-century Andalusian poet and Jewish philosopher with a Neo-Platonic bent. He published over a hundred poems, as well as works of biblical exegesis, philosophy, ethics, and satire. Scheindlin is Professor of Medieval Hebrew Literature at the Jewish Theological Seminary and a former Guggenheim Fellow. Dr. Scheindlin’s main field of research is the encounter of Hebrew and Arabic cultures in Spain, especially as embodied in the poetry of the two traditions.

Every once in a while, I find a gem in my pile of books. The idea that an 11th-century Jewish poet would be one of these treasures that came as a complete surprise. I will admit that my knowledge of Jewish poets starts with Solomon and then jumps all the way to Ginsberg. Not to take anything away from the poet, but Scheindlin does a superb job of translating the poetry to modern English. Unlike many translations of older works that are translated into older or very formal English, Scheindlin uses simple language and completely captures the essence of the work with elegance.

Perhaps, one of the unique aspects of Gabirol’s writing is in his devotional poems. He may be the first poet to address God on intimate terms. This familiarity with his creator plays into his ego as writes:

I’ve sculpted my own poems out of pearls. My poems elevate me well above the people of my age — indeed, all ages.

A prince am I, and poems are my subjects; a lyre am I for bards and singers all.
My songs are coronets for kings and turbans for the heads of courtiers.

But some, or a great deal, of that boasting, is well earned:

The heavens dressed in black, the moon seemed dead, buried by the clouds.
…
The night put on black chain mail —
thunder pierced it with a lightning lance,
and then the lightning fluttered through the sky as if to mock its fate,
for like a bat the darkness spread its wings, and when they saw its flash,
the crows of darkness fled.

Gabirol places a great deal of emphasis on wisdom. He writes that he values nothing more than wisdom. If his heart rejected wisdom, he would turn against his heart. He was fortunate to be at the right place at the right time. Being born and raised in Moorish Spain, Gabirol enjoyed what most Europeans were missing. He lived in an enlightened environment with education and with a population that did not expel the Jews like earlier Christians in Spain did. During Gabirol’s lifetime, the Jewish population flourished in Spain and he could turn to his art without fear or worry.

The presentation of and translation of Gabirol’s work by Scheindlin is beyond well done. He shows the original Hebrew along with the translated work for anyone fluent in both languages. It is applicable to all who enjoy poetry regardless of religion or literary preference. The subjects are wide-ranging and do not seem to be trapped in a medieval mindset. The words and writing are clear and meaningful and make this a collection worth keeping.