Book Review — August 1914: France, the Great War, and a Month That Changed the World Forever 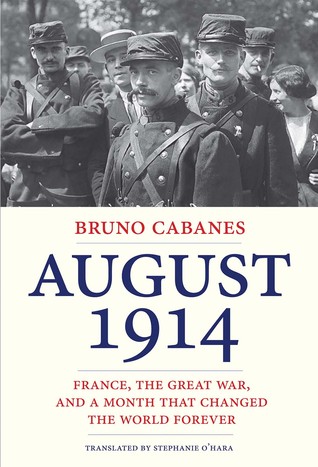 August 1914: France, the Great War, and a Month That Changed the World Forever by Bruno Cabanes is a detailed account of the first month of World War I. Cabanes received his Ph.D. from the Université Paris-I Panthéon Sorbonne in 2002. He is particularly interested in the period of transition that followed World War I. August 1914 was a finalist for a prestigious French book award, the Prix Fémina for nonfiction, in 2014.

Over the last few years, countless books have been published and re-released for the 100th anniversary of the First World War. In America most center around the war from the American point of view or the British view. Poetry collections from British soldiers in the trenches are easy to find. The story of the Lafayette Escadrille is well known. Books on German aggression and the Russian revolution are also easy to find. I have even read a few books on the war on the eastern front. I have not read a book from the French view.

Cabanes book present the French view on the war. The facts are the same as many other books but the details and presentation are new. The French Plan XXVII and its execution are covered in detail. Its (as well as the Schlieffen Plan’s) failures and successes are covered. Joffre’s execution of the plan and its adaptations are well explained. The British are seen in a less decisive role and Joffre despite his early failures comes through as the mastermind that held the French army together and essentially saved France. Trench warfare is generally seen as a disaster, but digging in is what saved France from being overrun.

The idea of fighting another war against Germany (Prussia) was not a central plan for much of France. Labor unions and Socialists opposed the idea war and present a good deal of resistance to military build up and conscription laws. Cabanes gives the reader an inside look at the mood and politics inside France before the war. It takes a great deal of effort to change people’s minds from peace to going to war. For example, the United States did not enter the war until 1917. Wilson ran on a peace platform even though he knew that war was inevitable. It took the American population longer to accept that. Even after the start of the war stories of German agents giving poisoned candy to children flowed freely through the French population. People were instructed to be on the lookout for German spies. Once the war started an effort to keep the momentum going in popular opinion continued.

World War I has been called the first modern war. It was a mix — Horse cavalry and the machine gun. The civilian population and property became targets as the rape of Belgium soon proved. Railways sped up mobilization and telephone and telegraphs kept military leadership informed of the war but at a safe distance from the fighting. The mismatch in technology and military tradition helped increase the slaughter. On August 22, 1914, alone, the French suffered 27,000 deaths in fighting. From August 5th -September 5th, French casualties totaled 329,000.

As I read this book, I was also listening to Barbara W. Tuchman’s The Guns of August covering the exact same time period and events. It was interesting to compare and contrast the information presented by an American historian and French historian. Although is often said that the winners write the history, it is interesting how we chose the winners that speak our language to base the overall tone and emotion of events. Highly recommended, not for any new information, but from the point of view that is similar but different from the commonly read American or British views.