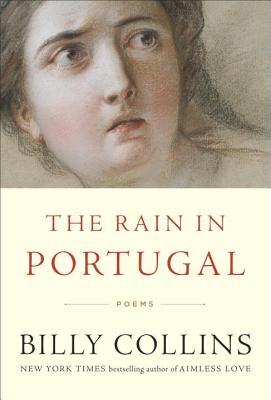 The Rain in Portugal: New Poems by Billy Collins is the poet’s latest collection of poetry. This collection will be available on October 4, 2016. Collins is an American poet. He served two terms as the Poet Laureate of the United States from 2001 to 2003. In his home state, Collins has been recognized as a Literary Lion of the New York Public Library (1992) and selected as the New York State Poet for 2004.

Collins breaks the stereotype of the stiff and stern poet. His writing is clear and he has a knack for blending the infinite with the common. He is a poet that can drop an f-bomb and not offend anyone. To be fair, though, he rarely uses it. He tells of his black cat whose two yellow circles of her eyes are the only sign that the black blob of an animal is approaching. In departing, he notes, there is only a single circle when her tail is held high. This is something he compares to Paul Revere’s lantern. Not one’s typical expectation of a national poet laureate.

In “Cosmology” he admits difficulty in the Hindu version of the earth resting on the backs of four elephants. Instead, he envisions the Earth resting on Keith Richards head. Richards with a Marlboro in one hand and a bottle of Jack Daniels in the other keeps the earth spinning and happy by talking about how the blues influenced the Rolling Stones. Collins,also, ponders what the weather would be like the day after he dies and what will happen in the world and in a small Ohio town after his death. “Tanager” presents two images one of wanting a walk in nature and the second the morning news that seems to interfere with the walk — Man’s world vs nature’s world.

Collins also presents the bigger picture of things. A lost child on the beach leads to thinking of America’s manifest destiny. A boy’s confusion on why a lobster is black and dark, not red. His writing about the first poem after the death of the English language has a humorous side but also an element of loss. Simple natural things such as biological needs tie directly into the universe in “Under the Stars.”

Collins has an uncanny ability to write poetry that is easy and enjoyable to read. Much of it lies in the open and on the surface with enough under it give it depth. His writing reads easy and smooth taking the reader along effortlessly. Many poets seem to try too hard to make their poetry work. Collins’ words, however, flow naturally even when talking about the rain in Portugal. Another great collection from an American treasure.