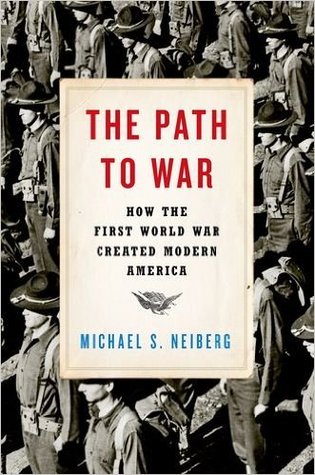 The Path to War: How the First World War Created Modern America by Michael S. Neiberg is an examination of how and why the United States became involved in World War I. Neiberg earned his PhD from Carnegie Mellon University. He is currently Professor of History, Department of National Security and Strategy, US Army War College.

When asking a reasonably informed American why the US became involved in WWI and why it sided with the Allies instead of the Central Powers the response would probably be the Lusitania or maybe even the Zimmerman telegram. The Lusitania, however, was attacked and sunk two years before the US declared war. The Zimmerman telegram was a plan that was still in the idea stage. Zimmerman sent it to the German ambassador in Mexico and it did not evolve much from there. Britain, however, held it like a carrot in front of the American war machine.

There were mixed feelings in the US. Irish-Americans were torn between loyalty to the US and loyalty to their kinsmen wanting home rule. German-Americans were also divided at the start of the war. Americans as a whole want to stay out of the conflict. It was barely fifty years before that America was involved in a very bloody Civil War. Not many were willing to bleed for Europe. Siding with the allies was not a sure thing either. America demanded freedom of the seas and trade for neutrals. Britain created an extensive list of contraband items including cotton, much to the dismay of the American South. More than any country involved in the conflict, Britain needed the US to intervene. First, it relied on imports for the majority of its food supply and Germany was taking a toll on its merchant fleet. Secondly, Britain was going bankrupt. It was spending itself out of the war.

In the US, the war became a political issue that few wanted to side with. Even as Wilson’s “Too proud to fight” speech was mocked most wanted neutrality. The countries fighting were for the most part monarchies and most had empires. This had little in common with American ideals of democracy and independence. However, the international pressures were moving the US closer to war; it would only be a matter of time. In fact, just five months after Wilson won the presidential election with the slogan “He kept us out of war,” America was at war.

Neiberg examines the internal factors that drew the US into the European war as well as the external pressures. Like WWI, itself, there is no one reason for going to war but a string of events that lead the US to fight over there. America was not militarily prepared for the fight and even its recent military efforts to track down Poncho Villa in Mexico were a failure. The navy was out of date and a long way from Theodore Roosevelt’s Great White Fleet. America had become complacent in its geographical isolation. The Path to War sheds light on the real reasons the US, reluctantly, entered the conflict. Neiberg digs deep into the domestic issues of the United States and provides the answers. Some answers are expected and others are not usually mentioned in history books. World War I was a war that should not have happened on the scale it did. There were so many pieces that had to be perfectly placed or totally ignored for a regional conflict to grow into a worldwide war. America’s entrance into the war was not as clear cut as many like to think, however, it was the start of America’s rise as a world power.