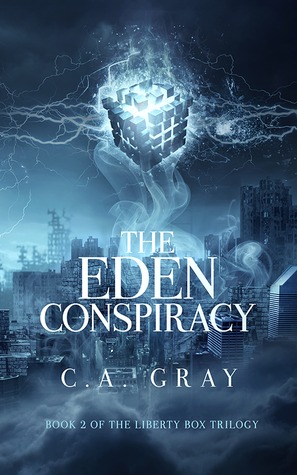 The Eden Conspiracy by C.A. Gray is the second book in theLiberty Box series. Gray is the author of the YA FantasyPiercing the Veil trilogy, as well as the NA Dystopian series,The Liberty Box. By day, she is a Naturopathic Medical Doctor (NMD), with a primary care practice in Tucson, Arizona. Additionally, she writes medical books under her real name. She holds a BS in Biochemistry and Molecular Biophysics from the University of Arizona, with minors in Spanish and Creative Writing. She also teaches college chemistry and writes a weekly column in the Tucson Citizen called “Natural Medicine Tips”

I usually do not read much contemporary fiction, especially Young or New Adult, but Gray seems to add an extra level to her writing . In the first book, I noted the historical play on the idea of a republic and democratic people’s republics. The thought of being safe and secure is actually more important than actual safety or security is also played through this series. Gray continues on this deeper level with the problems of revolution. What does one do when the rebel leadership seems as totalitarian as the regime being fought? The promised land of freedom in The Eden Conspiracy is called New Estonia. I wondered why the choice was Estonia. It is a rather small country with little bearing on world affairs. But, being old enough to remember the maps from the cold war, the former Soviet Baltic states border had a note: “The United States does not recognize the incorporation of Estonia, Latvia, and Lithuania into the USSR.” Whether or not Estonians knew it they were a symbol of the struggle for freedom at least in the eyes of the US government.

On the surface level, the story reads well and moves at a good pace without anything to throw off the reader’s suspension of disbelief. Granted it is science fiction but Gray’s fiction is remarkable in creating a believable story. The dynamics of the rebel group are realistic and add to the drama. Kate moves to center stage in this edition. The reader will see her grow from the spoiled, upper-middle-class news darling to a real person. Her days of simply being a talking head are over. She faces challenges as a rebel and as someone who wants to contribute. Her personal life is also in turmoil as her perfect husband in the old world does not seem to be the perfect man when out of his element. She works closely with Jackson whose element is the new reality. She finds herself emotionally torn.

Gray continues her streak of great writing. This is not my usual reading material, but I can definitely see the worth of this series. The Liberty Box series as well as <i>Piercing the Veil </i>are quality literature for the Young Adult crowd. It is also written smartly enough to hold an adult’s interest and pick up on things that a younger reader might miss. The Liberty Box series has action, the good fight, a strong female lead character, and a timely message on the perception of reality. Extremely well done.