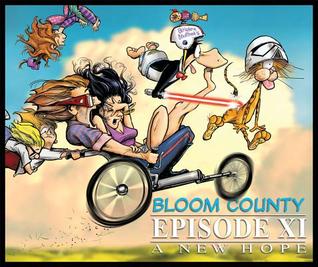 I used to always read the Bloom County strip in the newspaper. Newspaper? A tortilla made from water and grated trees. Overseas I used to get Bloom County in “The Stars and Stripes.” That newspaper arrived in batches allowing for binge reading. The days of the cold war brought the Basselope and Opus’ SDI solution. Oliver Wendel Jones accidently put his father’s Jaguar in orbit around Pluto. While in boot camp a friend sent me the Sunday edition Bloom County were the gang sing “Let’s Get Liberal” in tune Olvia Newton John’s “Physical.” Bloom County followed me around my time in the Marines and was always a welcome break from the seriousness of the military. I mean, who could forget “Deathtöngue”?

It seems Opus has been taking a nap… for the last 25 years. He finds himself in 2016 with all the new technology and no Bush and Clinton (he thinks). The good news is that all his friends are back and they haven’t aged. It’s a struggle to adapt and there are mistakes. Opus posts a private Steve Dallas video on Twitter thinking Twitter is a chatroom for birds. Berkely Breathed brought back Bloom County last year on Facebook and this is the first collection of the story so far.There have been some changes in Bloom County over the years. The Starship Enterpoop has been replaced with the Aluminum Falcon and characters from that other space saga. Binkley anxiety closet is armed with a new orange haired anxiety. Opus and Bill run for president, mainly for matching campaign funds. Opus’ platform is simple: two spaces after a period. Surprisingly a popular platform until the font lobby starts offering money.

This book was the first I am hearing of Bloom County’s return. I guess being a bit like Opus, I prefer Twitter to Facebook. Regardless, it is great to have the guys back. I did read this book in one day. It was hard to put down after a twenty-five-year break.