Poetry Review — The Pilgrim and The Star 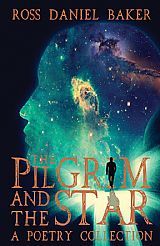 The Pilgrim and The Star by Ross Daniel Baker is the poet’s first collection of poetry. Baker started writing when he was 18 and is the author of the fantasy novel The Fable of Mythrian. Having completed a Higher Certificate in Archaeology at Leicester University and now pursuing a BA (Hons) in Humanities and Arts, he brings to his writing the influences of his studies.

This is a pleasant and likeable series of romantic, pastoral poems that stands up well against the classics. The writing is not as heavily structured but the reader will find rhyme schemes and even rhyming couplets in a few poems. Nature is the theme of this collection and I was expecting nature and man to begin to compete as the poems went on, however, they did not or at least not in a meaningful way.

Baker divides the poems into four seasons and although each poem can stand alone they form a path through the year. This format and some of the writing reminded me of Vita Sackville-West’s poem, The Land. There is a more modern connection to nature than what was held by the romantic poets. It is a less intimidating poetry than Wordsworth or Coleridge, but just as enjoyable. Baker takes the reader to an outdoors that is harmonious and peaceful compared to the urban/suburban life.

Where the russet fungi bleeds from the crevasses
Of a weathered tree, whose fruitless frame embraces
The creeping ivy, do I now feel this deep pain
Of which on my journey, I have tried to contain.

“The Wilds of the Sleeping Forest”