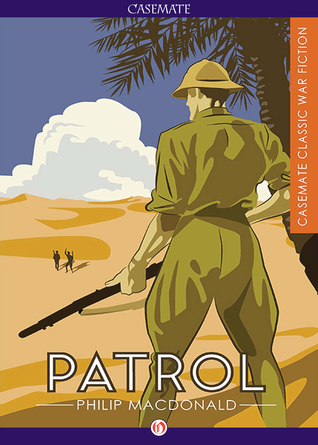 Patrol by Philip MacDonald is the novel that John Ford used as the basis for The Lost Patrol. MacDonald served with the cavalry in Mesopotamia during World War I. After the war, he trained horses for the army. In 1931 he moved to Hollywood. His writing includes over twenty-five novels which made him one of the most popular mystery writers in the 1930s. He also wrote screenplays and fifteen of his novels became movies.

I picked this book up hoping it would explain some of the war in Mesopotamia. American interests in World War I usually does not extend beyond the Western Front. However in this book Mesopotamia is just the setting. A British unit is on patrol and their lieutenant is shot and killed, leaving the sergeant in charge of the men. The lieutenant, however, is the only man who knew the mission and their location. Any attempt to get back to the British outpost now needs to be based on luck. The men in the unit are from a wide variety backgrounds and interests — An actor, a man from Cockney, and a Jew. The term Jew is thrown around quite a bit along with the “n” word. The “n” word, for the most part, is from the nursery rhyme, Ten Little “N” where people disappear one by one. The same thing happens in this novel. It is interesting too that profanity is censored in the book and not racial slurs. The world was different in 1927 England when this book was published.

This book shares the same plot line as future works like Agatha Christie’sAnd Then There Were None (not the original title, by the way) or Alfred Hitchcock’s Lifeboat. It is more of a book of people dealing with the unknown enemy or challenge. The people themselves who are usually controlled by societal forces are now in a new and different situation. Here the men are in an unknown position lead by a man, who although an NCO, is not an officer. Although the sergeant manages discipline, he does not carry the clout of the lieutenant had even though he was not liked. The sergeant must work on two levels — as a leader and as one of the men. It is a good story, but not really a war story. The war provides the setting. The men and situation provide the story.