Notes on The Social Contract 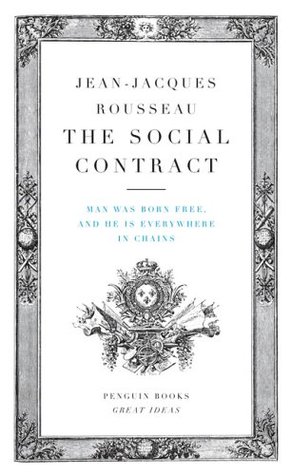 An update to the previous…

Rousseau probably has the most recognized opening line in political theory/philosophy.

“Man is born free and everywhere he is in chains.”

The idea of the social contract is to move man from the state of nature (with unlimited freedom and limited security) to a society. The society is a compromise where a man gives up his unlimited freedom and receives security in exchange. Giving up freedom never sounds like a good idea, but Rousseau makes his point. In the state of nature, a man devotes much of his time protecting his stuff. If someone takes you stuff you are free to punish the offender (if you are capable). In society, you lose the right to punish offenders and forfeit that right to a legal system. There are rules that are enforced by law so one does not need to spend all his time guarding his stuff. There is an exchange of freedom — a loss counteracted with a gain i.e. freedom to do something other than guarding your stuff.

Rosseau promotes the idea of a general will. Society, all its members, provide a voice for direction. It is all the voices that determine the general will. Although not always practical many societies result to representative legislatures, Although this limits the individual voices, it can work unless:

1) Factions are formed (political parties…especially when there are only two)
2) Members of the legislature coming under the influence of interests (rich, corporations, musket lobby)

Rousseau writes much in the way of a democratic society always doing the right thing by following the general will — the majority view, which should be very large since every voice is heard as an individual. You are not limited only two opinions or parties. Society should move along very well and move along in the utmost of fairness and justice. Rousseau is often cited as the father of modern democracy.

Rousseau is also credited as the Father of modern totalitarianism. The general will idea plays well into the hands of tyrants. Look how many dictators get elected and reelected with 97% of the vote. General will all the way! Perhaps a bit more chilling is Rousseau comments on what happens if you disagree with the general will. Rousseau states rather simply that, everyone makes mistakes. It’s OK. It happens. Society will simply force you to be free.

I totally made up the “musket lobby” but I imagine the reader gets the jest of it.