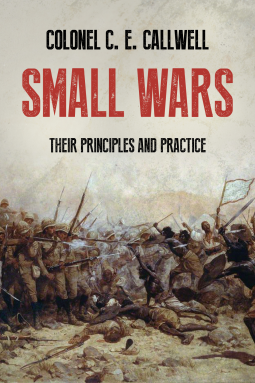 Small Wars: Their Principles and Practice by Charles Edward Callwell is the reprint of the 1896 publication. This edition is from Endeavour Press. Callwell (1858-1928) was an Anglo-Irish officer who ended his career as a major-general and received a knighthood for his services. He personally fought in the 1880 Afghan War, the 1880-1 First Boer War, the 1897 Greco-Turkish War, and the 1899-1902 Second Boer War before retiring in 1909.

Seldom is it the big wars that bog us down, WWI being the notable exception. It is the little ones that cause the most problems for governments and nations. War historically has been seen as large armies moving against each other. WWII, the American Civil War, the Napoleonic Wars all were mainly large forces against large forces. However, many conflicts of colonial powers, especially England and France, involved fighting small local bands of rebels or securing peace on their terms. Small war fighting did not go unnoticed in America either. The interwar period saw the US Marines engaged in several actions throughout latin America. Later this experience would get the Marines into Vietnam as the small war experts…thirty years after the fact.

Callwell draws on personal experience and history to show the success and failure of military units in small wars. He explains what tactics should be used and why. Similarly, he explains why some traditional thinking does not work in smaller scale conflicts. Some of the examples seem humorous (in hindsight) and typical of the military and military intelligence. One example was the taking of a fortified position in the middle of the jungle. There were no roads and men, equipment, and animals had to cut a path through the heavy jungle to reach the objective. When they finally arrived, they found the fort to be not only unfortified and unarmed, but a lamasery occupied by a single monk. The tactics are good and most have stood the test of time; however, some are dated. Modern GPS, equipment, and MREs (rather than food on the hoof) have simplified some aspects. The primitive enemy now is more than likely to have the internet and satellite communications and operate much more coordinated than the Zulu or Boers. Also, the Camel Corps is most probably a thing of the past.

An extremely important military book that has been modified and updated by modern services, but still many of its lesson are lost in actual combat.