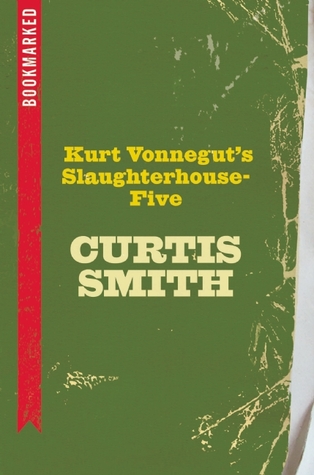 Kurt Vonnegut’s Slaughterhouse-Five: Bookmarked by Curtis Smith is part of IG Publishing’s series of Bookmarked books. Authors are invited to share their story of the book that influenced them the most. I have never met Curtis Smith, but it would almost seem that I knew him for a long time. We have quite a bit in common. We are both from northern cities, fathers, spent money on books as kids, fascinated by shortwave radio, enjoy history especially WWI, and are almost the same age. The writing seems very familiar and almost as though we walked the same path. Smith went to college after high school and became a teacher. I went to the Marines after high school. There is the split. Smith wonders what the military and the possibility of dead bodies would have been an experience he could have endured. I wonder if a classroom of middle school children is something I could have survived.

I first encountered Smith’s work in Best Small Fictions 2016. His contribution was called “Illusions.” After posting my review he asked me if I wanted to read his latest book on the book that inspired him the most — Slaughterhouse Five. I said, “yes” thinking it had to be pretty dark — the firebombing of a city and, from what I recalled, a mentally broken soldier. I read Slaughterhouse Five back in the early 1980s and that is what I remembered of it. I re-read it again before starting on Curtis’ book not trusting my memory and came away with a better understanding. Perhaps I was a bit like the Marine major Billy Pilgrim meets at the Lion’s Club in those days.

Smith starts but telling the reader about the book. It is the 29th most banned book in the United States. In fact, a North Dakota school burned all their copies in the firestorm of the school’s furnace. It has been called anti-Christian and obscene without seeing that the true obscenity lies in the destruction of a beautiful city and the amount of human bone meal the new city is built over. “So it goes” punctuates the violence and acts to numb the reader and allow him or her to simply accept violence and mass murder as something that naturally happens. There is so much horror in the book, but it is broken up with a dark humor. Billy Pilgrim is a walking cartoon for most of his military service and time as a prisoner of war — covered with a too small, fur collared jacket and silver boots.

Paul Lazzaro is the evil man in the story. He promises to kill Billy to avenge the death of Roland Weary who blames Billy for his gangrene and pending death. Lazzaro is by no means a nice guy but he kills Billy with a laser rifle. The whole mockery of death. Slaughterhouse Five was written in 1969. At the time, a laser was seen as a weapon that could split an atom at 20 at light years. Billy’s killer uses precision to accomplish his goal. The bombing of Dresden was the indiscriminate killing thousands. One was evil and the other is accepted.

“A single death is a tragedy; a million deaths is a statistic.”
Josef Stalin, attributed.

Smith writes in a Tralfamadorian style seemingly jumping randomly from one point to another. It works extremely well and earthlings are clued in on the changes by inserted factoids about exemplary humans like Blokhin, the sporting contest of Mukai and Noda in China, and the origin of the word genocide. Smith also includes his stories of growing up, raising a son, and dealing with common core education.

Smith discusses PTSD and talks of a famous picture of a WWI soldier suffering from shell shock. The black and white adding additional emotion to a haunting picture. I am reminded of Septimus Warren Smith from Virginia Woolf’sMrs. Dalloway. Woolf also entered my mind when Smith was discussing walking along the beach with his wife and son watching the waves. He also reminds the reader of modern literature in the world today. Conservative, Christian leaders in government service preaching the genius of Ayn Rand while missing the point that she was anti-service, an atheist, and a critic of Ronald Reagan.

The biographical information and the discussion ofSlaughterhouse Five tie in superbly. It was like sitting down with an old friend and talking about the past and about that book we read long ago. Far from the dark and depressing story, I was expecting, Smith’s writing on his life and Vonnegut is leveled with good and bad. His historical references in the book prevent it from being a “feel good” book and levels the tone. But all the same, it is a book that embraces the reader into a comfortable learning discussion. Like Slaughterhouse Five’s mixture of humor and horror, Smith finds his mix of book and biography. An outstanding take on life, the world, and the book.

Smith, like Vonnegut, ends his book with a bird’s call of “Poo-tee-weet?” Why does a bird tweet interrogatively? That puzzled me. What could a bird possibly ask? Then I remembered this from Auguries of Innocence and M Train by Patti Smith:

They know, I thought, like the birds of Iraq before shock and awe on the first day of spring. It was said that the sparrows and songbirds stopped singing, their silence heralding the dropping of bombs.

Perhaps the birds are asking is it over, or more likely “arethey over?”