Book Review — Air of Battle: A Pilot’s Account of World War One 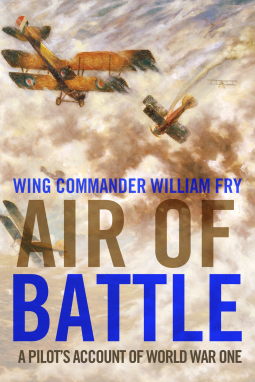 Fry enlisted in the army underage and made it all the way to the trenches before being sent home. Once back in England and of age, he tried to become an aerial observer and ended up training to be a pilot. Failing the mechanical part of the training and risking washing out of the program, he was saved by new orders. Fry records all his wartime experience in a straightforward manner reporting the facts and experiences without added emotions or exaggeration. He, also, was also one of the lucky ones despite many mishaps, he survived the war and lived to be ninety-five.

For those who read WWI history, especially the air war, most of this book seemed very familiar. There were a few times in the reading that I thought I have read this before. I know I read this before. As it turns out, I did read some of these stories before. Fry’s detailed account of the air war is perhaps one of the most complete and well-written memoirs that have survived. It is often quoted and sourced in WWI aviation histories. The writing style and storytelling make this book hard to put down. As a history, it is hard to beat. A remarkable read.