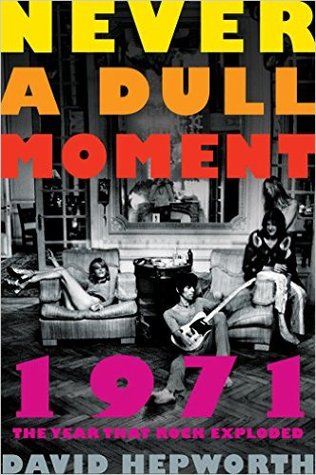 1971 – Never a Dull Moment: Rock’s Golden Year by David Hepworth is a look at the revolutionary musical year and how it changed the future of rock music. Hepworth is a music journalist, writer, and publishing industry analyst who has launched several successful British magazines, including Smash Hits, Q, Mojo and The Word, among many others.

I was eight in 1971 and although a bit young to remember most of the year I do remember bits and pieces. It was the year All in the Family aired. I thought Archie Bunker was funny but didn’t understand the humor. It was the year astronauts rode the moon buggy on the surface of the moon. In music, how could anyone miss “Joy to the World”, “Maggie Mae”, and “Me and Bobby McGee”. I remember the music because for the large part it is still around. Granted (and maybe, fortunately) the Osmonds’ “One Bad Apple” has gone away.

It was the start of the era where music stayed and although it was still around, bubblegum pop was being pushed aside. The big names came out and moved to their prime. Led Zeppelin, The Who, Pink Floyd, and Black Sabbath all found traction in 1971. The music industry started to change too. No longer was it waiting to play number one songs. It actively searched for them. Stations realised that it was better business to discover new music than merely follow along. I was fortunate to grow up with a very progressive radio station, WMMS, that promoted new bands. It was also the era of album rock and longer songs like “Stairway to Heaven” and the 45 you had to flip over to listen to the whole song “American Pie.”

Hepworth examines the stories behind the music how the industry thought they were getting a mediocre album from Carole King. Even the photographer for the album cover arrived to find a frizzy-haired woman in jeans and a pullover sweater. She looked like she was about to go work in the garden not make an album cover. The photographer put her cat in the frame and suddenly Tapestry became an iconic album. Tomboy Karen Carpenter came to fame as the drummer who sang. Once she was moved from behind the drums to center stage she became self-conscious of her looks and body which eventually lead to tragedy. December 1970 was the end of the Beatles and 1971 was the year Mick Jagger worked to save the Stones from breaking up. Black Sabbath released “Sweet Leaf” showing that Keith Richards wasn’t the only one who could experiment with guitar tuning. And on the subject of experimental, Pink Floyd released Meddle.

1971 was a unique year. Music spread. The “Theme from Shaft” and “Jesus Christ Superstar” brought music to other media. Just a quick glance at the top albums shows how 1971 shaped music — Led Zeppelin IV, Who’s Next, Hunky Dory, Sticky Fingers, LA Woman, Aqualung, The Yes Album, Pearl… 1971 is a playlist in a year. Even for me, the music from bands and singers I normally wouldn’t listen, Joni Mitchell or Funkadelic, to all made music that I like. Hepworth knits the year together and explains the importance of that year in music combines it with pop culture. One would be hard pressed to find another year that offers the range and quality of music.

Book Review — High on Rebellion: Inside the Underground at Max’s Kansas City

The artist must maintain his swagger, he must, he must
He must be intoxicated by ritual as well as result
Look at me, I am laughing, I am laughing
I am lapping cocaine from the hard brown palm of the bouncer
~ Patti Smith, “High on Rebellion” 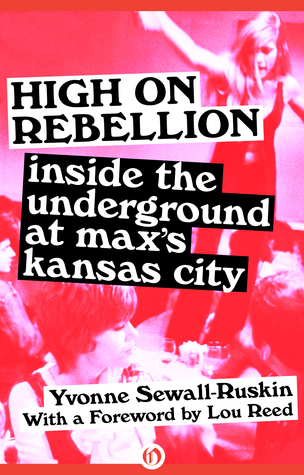 High on Rebellion reads like an online memorial page — Remember that time… It is not set up in chapters and paragraphs as such, but rather groupings of comments from patrons and employees strung together to form a coherent story. Leee Black Childers also inserts short biographies throughout the text. The big names hung out at Max’s and there is no shortage of name-dropping throughout the book. An employee tells how Mickey told Janis Joplin to leave because she looked dirty and unkempt. That was the same reason Patti Smith and Robert Mapplethorpe were not allowed in. Mickey allowed a lot of things but being physically dirty was not one on them. Lou Reed was even interviewed or contributed to the book; but unfortunately, many of the big names are no longer alive. Andy Warhol, Candy Darling, Jim Morrison and many others have not survived and live as memories in this book.

There was also two personalities of Max’s. In the daytime, it was a nice restaurant with monied clients. One story is about a lunch customer that happens to enter Max’s at night. The next day she returns and asks Mickey if he had any idea what went on in this place at night. Night brought out the artists, poets, and musicians and with them came the drugs, drunken debauchery, and wild times. There were times of chaos. The reader will feel this chaos as the story moves from storyteller to storyteller. The reader will almost feel like he or she is in the backroom amongst the mayhem and celebrity.

Artist’s would trade their work for credit which kept many of them fed. Musicians got their first taste of New York there. Bruce Springsteen played there with Bob Marley opening. Aerosmith’s first New York show was at Max’s. Deborah Harry waitressed there. The Rolling Stones, David Bowie, and Led Zeppelin visited Max’s. Iggy Pop and Lou Reed were regulars. Max’s was the starting place for many and the hangout for the famous. Yvonne Sewall-Ruskin has put together a piece of music and art history in what feels like a living record. Rather than just documenting she allows the survivors to reenact the history in their own words with little narration. A great history told in a unique way. 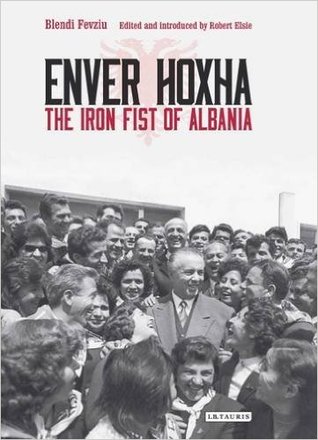 Enver Hoxha: The Iron Fist of Albania by Blendi Fevziu, edited by Robert Elsie, and translated by Majlinda Nishku is perhaps the first English-language biography of the Albanian dictator. Fevziu is an Albanian journalist, writer, and host of the TV talk show Opinion. He graduated in literature and Albanian language at the University of Tirana in 1991 and in 1989, he was part of the staff of the Student newspaper of the University. In December 1990 and February 1991 he was an active participant in the students’ movement that brought the change of regime in Albania. On 5 January 1991, he was the co-founder of the “RD” (Democratic Renaissance) newspaper, the first free newspaper after almost 70 years of independent media blackout in Albania.

Albania was mostly a forgotten country in the West. It was a communist country and a member of the Warsaw Pact but seemingly a quiet partner. Erich Honecker, Nicolae Ceausescu, and Soviet premiers were all well known, but few would recognize Enver Hoxha. What was know about Albania was little, too. It was portrayed as an agrarian country that used rather primitive technology. I remember reading and seeing a new tractor that was a design from decades ago. Hoxha, himself, never finished his college education. In fact, he dropped out of a few schools. In an early “trial” after the Germans fled Albania, Hoxha appointed a judge whose highest education was elementary school. The Hoxha regime was as undereducated as it was lasting.

Hoxha did have a hero and that was Josef Stalin. He shared many traits with the Soviet dictator. They both dropped out of religious training –Stalin Russian Orthodox and Hoxha Islam. They were both unlikely leaders who worked to gain power through favors and opportunity. Hoxha had little interest in politics until he found himself in it. Like Stalin, after gaining power Hoxha eliminated all his competition and ended all competition for power. Stalin’s purges hit the military and Hoxha purges the educated. There are plenty of similarities between Hoxha and Stalin both personal and governmental.

Hoxha, like he made his country, was quite isolated. After WWII, he never set foot in a free country. His last visit to a communist country was in 1970. He lived in an area called the block, heavily guarded area of the city with limited access. Hoxha was paranoid. That is what kept him in the country in seclusion. His last visit to Khrushchev’s Soviet Union, he would only eat food from the Albanian Embassy prepared from ingredients collected from several small markets. He has refused to fly out of the Soviet Union and took a train to Austria before flying into Albania. He never trusted Kruschev or the Chinese let alone any Western country. Albania as a nation ranked as the third poorest in the world. Not Europe, but the world.

Enver Hoxha: The Iron Fist of Albania is a detailed look at the man who ruled Albania for over forty years. This book would have been better if it could have provided more details of the country itself. Although not published to be a country study, it would help western readers understand the country that was hidden by its own iron curtain. It is interesting how we have better histories of North Korea than we do of Albania.