Book Review — Under One Roof 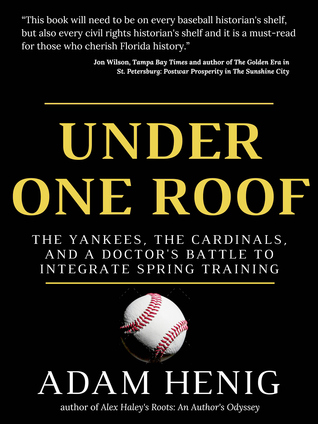 Under One Roof by Adam Henig is a story of baseball and civil rights that has remained virtually untold until now. Henig is a book reviewer and blogger. Henig’s writings have appeared in the San Francisco Book Review, Tulsa Book Review, Medium, The Biographer’s Craft and Blogcritics. He’s also been featured on the podcast, New Books Network: African American Studies. Henig is an active member of the Biographers International Group (BIO) and a graduate of California State University, Chico. His first book was Alex Haley’s Roots: An Author’s Odyssey.

We are a society of laws and generally we believe if there is a law, we are protected. All it takes is crossing in a crosswalk once and being hit by a car to tell you laws are nice but don’t always work. It is more frustrating that when law enforcement arrives at the crosswalk the victim is told, “You need to be more careful crossing the street.” In baseball, much the same thing had happened. An observer would see that racial segregation had ended in baseball and that everything should be fine. On the surface it was. All races played on the same fields shared the same locker rooms and team equipment. The Negro Leagues were pretty much over by the early 1950s. But like the crosswalk, a problem still remained.

The problem was spring training. Under One Roof centers on the life and works of Dr. Ralph Wimbish. Wimbish was seen as a community leader in the very segregated St. Petersburg, Florida. As a doctor, he was looked to as a natural leader in the black part of town. Dr. Wimbish entertained many black leaders, entertainers, and athletes at his house. It wasn’t that Dizzy Gillespie or Jesse Owens could not afford a hotel, but that they were visiting the Jim Crow south and options for a suitable hotel were nonexistent for a black man. This is where baseball comes in. When the Yankees and Cardinals both came to Florida for spring training their field was in St. Petersburg. They stayed in St. Petersburg hotels. This was fine unless you were black. Black ball players could not stay in the white-only hotels with their teammates. They were forced to the poor section of town or take lodging where Dr. Wimbish could find people wishing to take in boarders.

This is where the book turns from strictly a biography to a civil rights book. From an article Alex Haley wrote in SPORT in 1961 and an accounting of The Jim Crow laws of St. Petersburg, Henig fills in the missing history of the final racial hurdle in making baseball truly non-segregated. Dr. Wimbish puts himself in a central role in ending the ugliness surrounding St. Petersburg and baseball. As with a crosswalk there needs to be more than a law. There needs to be enforcement and pressure to ensure its obeyed. There needs to be someone who stands up to the status quo when it is wrong. Dr. Wimbish took that challenge and he did not accomplish this from a position of political or economic power, but from a position of doing what is right. This book is quite a discovery. It is a piece of history that was so accepted at the time and, until now, forgotten in the present.

2 responses to “Book Review — Under One Roof”