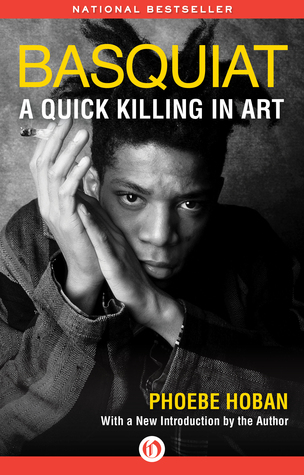 Basquiat: A Quick Killing in Art by Phoebe Hoban is the biography of the graffiti and studio artist Jean-Michel Basquiat. Hoban is a New York-based journalist. She began her journalistic career at Newsweek International, writing about new technology. In 1984, she began writing a technology column for New York Magazine. She is best known for her biographies of Alice Neel and Basquiat.

Basquiat began as half the SAMO team that spread graffiti and messages throughout New York City. Just a few years younger than Basquiat my first encounter with graffiti was in movies and television, especially the opening of Welcome Back Kotter. It was a different culture than what I was used to and one that did not always click with the rock and roll/punk environment I knew. Surprisingly I had seen Basquiat on television in Blondie’s rap “Rapture.” He played the DJ who I always thought was Fab 5 Freddy. Fab 5 Freddy does appear in the biography.

I did feel a bit out of my element in this book. Not just playing the unhip, old, white guy card because I really liked M.K. Asante’s Buck: A Memoir which also was outside my element, but I learned a lot about hip-hop and walked away impressed. Asante is also relevant because he wrote “SAMO” in his poetry collection, Beautiful. And Ugly Too.

Although I was not pulled into the book, it a testament to research and writing. It is not a happy biography — drugs, art dealers only interested in turning a buck, child-like behavior, lack of self-control. There are plenty of stories like this. Keith Richards spend a good deal of his career as a functional heroin addict. Janis Joplin and Jim Morrison both O.D.ed on heroin. My assumption is that fans of Basquiat would be equally as indifferent to my examples.

Personal preferences aside, this is a well done biography and for fans of Basquiat or the underground art movement. The amount of source material and research make this book a seemingly accurate portrayal of Basquiat’s life and his environment. It’s not a pretty world, but it is always real.

3 responses to “Book Review –Basquiat: A Quick Killing in Art”