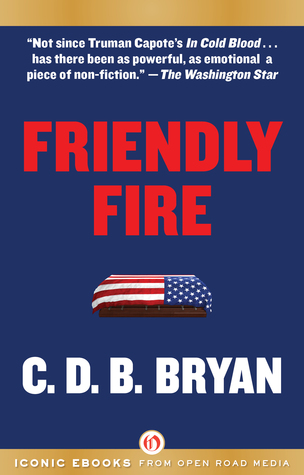 Friendly Fire by C.D.B. Bryan is not your typical Vietnam War book. Bryan, a graduate of Yale and (unhappy) veteran of the Korean War, developed this book from a series of articles written for The New Yorker. Friendly Fire centers around the friendly fire death Michael Mullen and his parents’, Pat and Gene, investigation of the event.

This is mostly written as narrative fiction with very few notes. Bryan admits that he was trying to present the story rather than the method of research. Michael Mullen died in Vietnam from artillery shrapnel from an American gun firing routine Defensive Targeting (DT) on February 17, 1970. There is immediate sympathy for the parents as they wade through and fight for information. Suspicion cast on the army with a wide range of clerical errors and the arduous task of fighting a bureaucracy. To help build a case for the parents, their family history in Iowa is traced back and the reader is taken into the family — normal small town America. The reader feels the frustrations as they battle the army for answers. Pat, especially, becomes an outspoken peace activist. The reader continues with little choice but to wholeheartedly support the Mullens.

About half way through the book the reader will pick up on things. Michael’s final paycheck given to the family is short because he took advance leave before going to Vietnam and the army deducted that from the check. Pat is outraged and blames the army for not allowing him to live long enough to pay it back with time in service. She writes the president and representatives, often. The FBI is following her and tapping her phone. She blames Michael’s battalion commander, LTC Norman Schwarzkopf, for killing her son and covering it up. Schwarzkopf was sacrificing troops to advance his career. I was just over halfway through the book when Pat started losing credibility with me. Not in her opposition to the war, but in her bitterness and looking to find a conspiracy and someone to blame. During a Pentagon visit, she becomes angry at a woman who compiles the casualty lists as if, somehow, the woman is actually creating the casualties.

The Mullen’s met with Schwarzkopf while he was in Walter Reed hospital recovering from surgery on his back. When Pat Mullens contacts Schwarzkopf, he said he would like to talk to her about that night. He agrees to meet and continues to invite Pat to talk whom seems more content to argue about meeting than actually meeting. Schwarzkopf is very open and the Mullens are very hostile. Bryan enters the book and plays mediator for the continuation. Bryan spends time with the Mullens and interviews Schwarzkopf. He searches for survivors from the night Michael was killed. This was a monumental task at the time. There were 1.3 million on active duty in the army in 1970 and no computerized recordkeeping. If someone left the army there was no Facebook or Google search to help track them down.

Bryan uses all the information available from eye-witnesses and records and recreates the night of the accident in the final chapter. The result will surprise some and not surprise too many veterans. The death of a son was a catalyst in what became a movement in the 1970s — anti-war and a loss of faith in elected officials, from the president on down. As much as this book is about the death of Michael Mullens; it is also about a change in the nation and the loss of hope and the American dream. Not your average Vietnam story.