Book Review — What Persists: Selected Essays on Poetry from the Georgia Review, 1988-2014 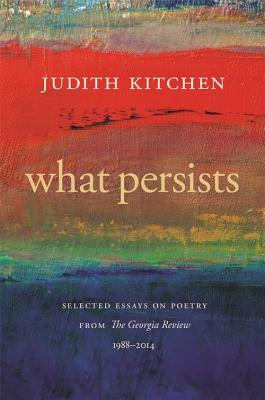 What Persists: Selected Essays on Poetry from the Georgia Review, 1988-2014 by Judith Kitchen is a collection of selected essays previously published in the Georgia Review. Kitchen was the author of six books and co-editor of for nonfiction collections. Her awards include two Pushcart Prizes for an essay, the Lillian Fairchild Award for her novel, the Anhinga Prize for poetry, and a National Endowment for the Arts Fellowship. She has served as a judge for the AWP Nonfiction Award, the Pushcart Prize in poetry, the Oregon Book Award, and the Bush Foundation Fellowships, among others. Kitchen was an Advisory and Contributing Editor for The Georgia Review where she was a regular reviewer of poetry.

I am quite new to poetry and enjoy reviewing it. However, I have no formal education in poetry. My area of study is political science and international affairs. I do find poetry a nice balance to the harshness of international dealings. I like the thinking and imagery that poetry delivers to the reader. It is a thinking relaxation for me and I would hate to spoil it with too much analysis.

As an undergraduate, I reviewed T.S. Eliot’s “The Wasteland” and I saw it as the aftermath of WWI and treated it in a historical sense. I came close to getting an “F” on that review because I didn’t focus on fertility. I documented my findings but that was not good enough. Here is Kitchen’s genius. She reviews poems and even if I didn’t notice her points, she points them out in a logical and meaningful way. Unlike a student failing to see fertility gods, she gently directs the reader to her findings. After that, she explains her findings by being intimately familiar with the poet’s entire works and who he or she was inspired by. In one poem she critiques she mentions Whitman. I would never have seen it. I wouldn’t have figured it out even with a hint. Kitchen points it out and identifies it. She finds themes no matter how minute through a poet’s work. Her mind worked like a wartime code breakers. The message in poetry is not always clear, but Kitchen finds order and meaning in what sometimes appears to be a jumble of words.

I found this collection of essays to be a wealth of information. She showed someone like me what to look for in poetry beyond the emotional effect. She isn’t heavy handed of monolithic in her findings, but she does show an aspiring critic what to look for in a poem. Reading her essays probably did more to open my mind to analyzing poetry than anything I have read or heard. Furthermore, her work tends to be enlightening rather than dictatorial. I will use What Persists many more times as a reference book on criticism more than I will use it as an analysis of the poems covered. It is said no one ever builds statues to critics, but Kitchen deserves one.  She had great insight into poetry.