Book Review — Pumpkinflowers: A Soldier’s Story of a Forgotten War 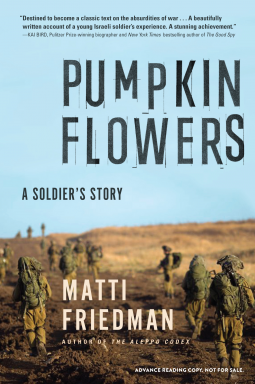 Pumpkinflowers: A Soldier’s Story of a Forgotten War by Matti Friedman is an account of the 1990s Israeli occupation of Lebanon. Friedman is an Israeli-Canadian journalist and author. In 1995, he made aliyah to Israel and now he lives in Jerusalem.

I picked this book up thinking it was a Vietnam memoir. The marketing blurb referenced Vietnam and the cover reminded me of a Vietnam scene. I was wrong in fact, however, very close in spirit. It seems that there are many similarities in the occupation of southern Lebanon and the border region and America’s involvement in Vietnam. The youth of Israel would have preferred not to be in a firefight much like the Americans decades before. However, they went when called and took part in a military action they knew was essentially fruitless.

The book is divided into three sections. The first is a record of Avi’s, a young Israeli soldier, involvement in the war. Avi left details of his service in letters and personal writings. The second part is the author’s account during his time in service and the reactions of the families of soldiers. The third part is again written by the author. He returns back to Canada to “get his accent back” and then travels to Lebanon as a Canadian. There he meets with the people he had pointed his rifle at earlier. There is a world of difference and the only change is which passport he was holding.

Pumpkinflowers is not just an account of the soldiers but also the military experience. The leaders were trained and ready to fight another large scale tank war, but against the Hezbollah that would not happen. Their walled outpost, Pumpkin, was staffed with more than infantry. There was an anti-tank squad with nothing to shoot at. Leadership was determined to fight the war they wanted and not the war they actually faced. The enemy changed tactics learning it was safer to retreat farther back into Lebanon and launch rockets than use men in cross-border attacks.

Friedman writes a valuable history that seems to be repeated over and over again. The Soviets did it in Afghanistan. America did it in Vietnam and almost again in Iraq and Afghanistan. When faced by a superior force the best action is to retreat and fight a guerilla war. Small groups can win against a far superior enemy if they believe in their cause and they fight a non-conventional war with an enemy who does not change its tactics. The last section also presents the human side of war experienced by those in the crossfire. People who grow up seeing their neighbors killed learn to hate those doing the killing, no matter what the reason. Friedman exposes war as something that is not black and white or fought by zealots, and recognizes that things change depending on which side of the line one is standing.