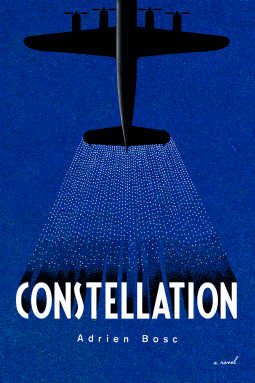 Constellation by Adrien Bosc is a novel centering on Air France Constellation BAZN flying on the night and morning of October 27 and 28, 1949. Bosc is a French writer and editor. The French edition of Constellation won the Grand Prize novel by the French Academy in 2014, Literary Award for Vocation 2014, and the Price Gironde News Scriptures 2014. The Constellation referred to in the title was Lockheed L-749A airliner. It was four engine propeller driven aircraft. It started regular service in 1947 and was still used by TWA until 1967. The aircraft line was finally retired in 1993.

Without knowing this was a novel the reader could easily think he or she was reading a detailed researched account of a fatal air crash. BAZN was scheduled to fly from Paris-Orly Airport, France to New York City, with a stopover at Santa Maria Airport, Azores. By 1949, transatlantic flights were routine and Air France was coming up on its 2,000 non-stop crossing. There was nothing out of the ordinary about the fatal flight on October 27 except the changing of the refueling stops from Shannon, Ireland to Santa Maria in the Azores because of weather. The pilot had over 60,000 flight hours including eighty-eight ocean crossings. His crew consisted mostly of former combat pilots. This was an experienced crew flying a plane with proven safety record.

Bosc weaves a story together alternating strands of the flight, search, and repatriation and the passengers. Of the forty-seven passengers, eleven were crew. The remainder included a Middle Weight Champion, a French violinist and her brother, a Walt Disney director, an artist, a Montreal newspaper editor, and five Basque shepherds coming to work ranches in America. The story of the flight is broken down into sections and brief biographies of the passengers are used to separate the flight and recovery. Even in a grim story, Bosc puts together some almost poetic passages:

…Atlantic. Reflected in the infinite puddle are the Big and Little Dippers, Orion, and Scorpio.

I have always been a fan of aviation stories most of them, however, not as tragic as this story. From an early age, stories of WWI pilots to specifications of commercial planes always interested me. The story of the flight is well done and the biographies add the human touch to the book. What confused me while reading the book was what to take as factual and what was made up by the author. The flight information seems to line up with the actual events. The passengers are all correctly identified. The question is where does reality stop and fiction begin. There are no citations through the book and reads like narrative non-fiction except that the author is entirely too young to be a witness to any of these events. I am left to assume that the book is more in the style of writing rather than the more cut and dry American style. The literary term is “faction” or nonfiction novel. The style was popular in the United States earlier with notable works such as Alex Haley’s Roots and Truman Capote’s In Cold Blood. The problem for some, like me, lies in what is true and what is fiction. For others looking for something interesting to read without the urge to fact check, this is an excellent novel of tragedy and the human connection to the fallibility of technology.

One response to “Book Review — Constellation”