The world gave me many things, but the only thing I kept was absolute solitude.
VII 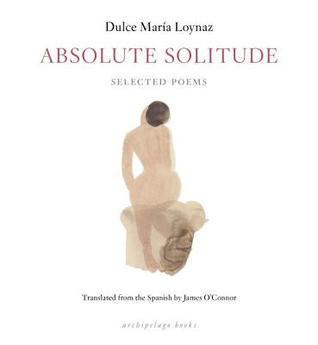 Absolute Solitude: Selected Poems by Dulce María Loynaz is the first comprehensive English translation of Loynaz poetry. Loynaz, a Cuban, wrote most of her poetry before the revolution and her work was, for the most part, forgotten. At the age of ninety Royal Spanish Academy awarded her the 1992 Cervantes Prize, the highest literary accolade in the Spanish language. The translation is done by James O’Connor, and although I do not read Spanish, the English version of her work captures the power and beauty of the original.

The unnamed poems that make up this book are simply numbered to differentiate between them. Some poems are a single line making a title a little difficult. Each line, however, carries an exponential amount of information. If a picture is worth a thousand words a line from Loynaz is worth many times more:

And I said to the pebbles, I know you are fallen stars.
Hearing this they lit up, and for a moment they shone — they were
able to shine — like stars.

I neither destroy nor create. I do not interrupt Destiny.

Loynaz mentions pebbles a few times in the above poem and in another comparing pebbles to stars. Stars shine with beauty, but pebbles one can hold in their hand and move or possess, unlike a star. She writes of love, faith, death, and solitude. Our solitude is the one thing, perhaps the only thing we can control. On death, she writes of the seeds of a now dead rose bush trying to grow at the base of the dead bush. They are choked out by the roots dead plant. She warns the reader to never allow death to choke out life, not even a little.

Absolute Solitude is a lost treasure recovered too late to be built upon. Loynaz’s writing is near perfection and it makes one wonder how much more could have created if she had not quit writing, or if her work received more notice before her ninetieth year. It was three decades after she stopped writing before her work was noticed by the Royal Spanish Academy. This is truly a remarkable collection.