Book Review — Farewell to the World: A History of Suicide 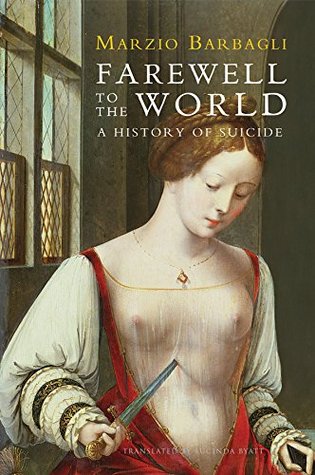 First, this book is not about the why people choose to die as such. It is a historic and cultural examination of suicide throughout the world. I lost a friend eight years to suicide, the author has lost five, so that is my interest in the subject, but a reader looking for answers of why a loved one took their life will not find it here. This is a scholarly sociological or historical writing backed by a great deal of research.

The book is divided into sections covering the West and Asia — India, China, and the Middle East. In the West, there has been the Christian notion of against suicide based on sloth and ending something God created opposed to the earlier Greek/Roman idea that suicide was the ultimate exercise of freedom. The Middle Ages brought the idea that suicide was also theft. If you were under the protection of a lord and required to work for him and you take your own life, you are in effect stealing from the landowner. Very warped religious ideas also come into play. People who want to die but are afraid of damnation must find a way to end their life by the hands of another. One way was to kill an innocent child. That killing saved the child from a life of sin and sent a perfect soul to heaven. The one who killed the child would be put to death, but with a clean conscience because their death was for saving a child’s soul. The church itself was torn on the concept of suicide. What is the difference between a woman who kills herself as a matter of honor and a martyr? A martyr through his actions chooses to die; an ancient version of suicide by cop. Why should that be honored and the woman condemned.

In the east sati, kamikaze, modern suicide bomber, and the Chinese historical affinity for suicide. The most surprising is that the Chinese were known to kill themselves over small issues, a word one witness said. Chinese workers in the Caribbean had to be guarded to prevent them from taking their own lives singularly and in groups. A great deal of words is also spent on sati, the suicide ritual of a wife taking her life on her husband’s funeral pyre. This tradition shocked and appalled both Christian and Muslim rulers and visitors. Indian women saw this tradition as maintaining faithfulness to their husbands. There also was not much for a widow to live for in historical India. Although times have changed a sati ceremony was stopped by the Indian police in the mid-1980s.

Farewell to the World: A History of Suicide is a well written and researched work. There is a great deal of information and detail including first-hand reports. The depth of the research immense. As a work of history and cultural studies this far exceeds expectations.

This book was not read for a review.

2 responses to “Book Review — Farewell to the World: A History of Suicide”