Poetry Review — The Whole by Contemplation of a Single Bone: Poems

When words cease to matter,
there is all this white space. 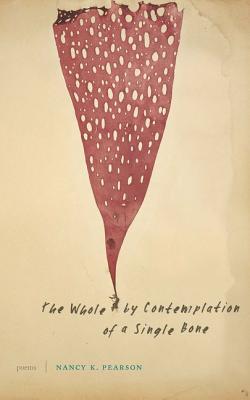 The Whole by Contemplation of a Single Bone: Poems by Nancy K Pearson is her second collection of published poetry. Pearson received her MFA from George Mason University. Recently, she completed two seven-month poetry fellowships at The Fine Arts Work Center in Provincetown. Previously she taught poetry at the University of Houston. Her work has won several awards and honors including runner-up at the 2007 Iowa Review Poetry Award, 2009 Lambda Literary Awards finalist, 2012 Pushcart Prize Nomination and numerous others. Pearson avid runner and cyclist, she now lives on Cape Cod with her partner.

Pearson’s second collection of poetry is an interesting work titled after Sherlock Holmes’ quote on George Cuvier’s ability to describe an entire animal by examining a single bone. There are several themes that carry through this collection including endurance, running, and science. The first two themes run consistently through the collection. Science takes several forms from elements to plate tectonics.

The writing at times is complex but very rewarding to the reader willing to take his or her time in the reading. There are two poems titled Houston and anyone who has spent time in that city will instantly recognize and relate to the subject. There are also two poems dealing with drugs and addiction. Nature, trees, and the earth, in general, all play a role in this collection.

Although not lyrical in style the poems do stay in the reader’s memory after reading. The paragraph form or seemingly random line breaks create their own structure and form. This is a collection that the reader will appreciate more with each reading. A complex mix of subjects, emotions, and style make this a unique collection.