“Don’t forget that you’re First Marines! Not all the Communists in hell can overrun you!”

Chesty Puller to his Marines, when surrounded by the Chinese at Chosin Reservoir. 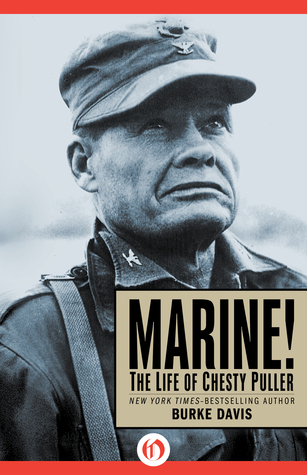 Marine!: The Life of Chesty Puller by Burke Davis is the biography of the Marine Corps most decorated man. Davis is the author of over thirty-five books, many of the dealing with the Civil War. He was known for his meticulous research.

Ask any Marine to name one person that personifies the Marine Corps and the most likely answer would be Chesty Puller. There are many stories told about Chesty Puller and remarkably they are all true. He stared down a grenade in WWII simply proclaiming to those around him it was a dud. He was a great leader and those who he pulled aside and corrected would later claim that Puller inspired them to be better Marines. He also knew the importance of the people under him. Whether a senior Non-Commissioned Officer or a private he was fair and knew they were key to his success. Once he saw a Second Lieutenant standing in front of a private who was repeated saluting him. He asked the Lieutenant what was going on. The lieutenant said the private did not salute him and to teach him a lesson he was making the private salute one hundred times. Puller said that was fair and that the lieutenant rates the salute, but he reminded the lieutenant that he is required to return ever salute the private gives. Puller watched as the lieutenant now returned each and every salute.

Puller believed in leadership by example. The senior men should always be last. Juniors were always first to the chow line, first to receive medical treatment and Puller was not shy in enforcing this to all those in his command. He was a rare officer that was respected and liked by all those who served under him. When the troops were sleeping in the mud, Puller was sleeping in the mud too. When the men marched, Puller marched with them rather than ride. Although serving under Puller was physically challenging, he believed that the harder his people trained the more effective they would be in combat and success in combat was the Marine Corps’ goal.

Marine! follows Puller from his childhood to his retirement. Puller’s entire military career is covered from his beginnings in Virginia Military Institute, through Parris Island and the end of WWI. What helped make Puller a successful leader was his early service in Central America. This experience was in a time when military valued staff positioning over combat. Puller gained a practical advantage for service in both World War II and Korea. He became the most decorated Marine in history and the only person to earn five Navy Crosses.

For the military historian or Marine wanting to learn leadership or history, Marine! is a very worthwhile read. Although Puller is known for his military actions, his personal life is also covered. I never thought Puller had time for a wife and children. Davis writes a well-rounded biography that does not disappoint anyone looking for a larger than life (true) story.

“Take me to the Brig. I want to see the “real Marines”.
– Major General Chesty Puller, USMC – while on a Battalion inspection.