Book Review — Why America Misunderstands the World: National Experience and Roots of Misperception 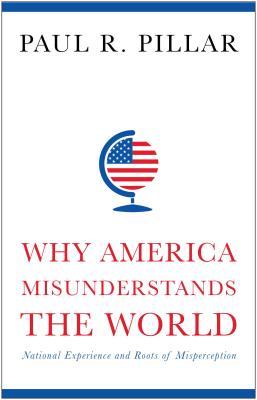 Why America Misunderstands the World: National Experience and Roots of Misperception by Paul R. Pillar is an examination of the American public’s understanding of foreign policy. Pillar is an academic and 28-year veteran of the Central Intelligence Agency, serving from 1977 to 2005. He is now a non-resident senior fellow at Georgetown University’s Center for Security Studies, as well as a nonresident senior fellow at the Brookings Institution’s Center for 21st Century Security and Intelligence. He was a visiting professor at Georgetown University from 2005 to 2012. He is a contributor to The National Interest.

America, without a doubt, carries the biggest stick on the world stage. We perfected unilateral retaliation under the Reagan administration. We see a “wrong” and we (attempt to) fix it. When an ally does not agree with us, the public reacts: Freedom Fries or going back to WWI –Liberty Cabbage. Many people believe the war on terror started with George W. Bush and not with Reagan’s “You can run, but you can’t hide speech.” Terrorism during Reagan’s time happened “over there” and not here so it was not important in the minds of most Americans. America has lived a fairly threat free existence until the 20th century. Isolated by oceans and having fairly weak neighbors, threats were hard to come by compared to Europe where previous wars showed how fragile peace was and how paranoia can lead to secret treaties and a worldwide war.

Historically, as a nation, we have been more interested in domestic policy than foreign policy. In 2006 a survey of Americans between the age of eighteen and twenty-four were asked to point out Iraq on a map of the Middle East — six out of ten failed to point out Iraq. Seventy-five percent of the same group could not point out Israel. Europeans, on the other hand, are used to hostile and shifting neighbors and geography in general. Is it really surprising that two of the most influential foreign policy advisors in recent American history have been Europeans — Kissinger and Brzezinski?

The War on Terror is an odd and different way of thinking of warfare. Wars are conducted between states or governments of states. Woodrow Wilson declared war on the Germany and its aristocrats and government:

We have no quarrel with the German people. We have no feeling towards them but one of sympathy and friendship. It was not upon their impulse that their Government acted in entering this war. It was not with their previous knowledge or approval.

Having a war on terror, Brzezinski tells us, makes little sense. It is like having a war against blitzkrieg, but it was a catchy enough slogan for Americans and even other nations to join in. I remember reading, after the fall of the Soviet Union, an article on how we would miss the Cold War in the future. The Cold War provided America with an enemy that not only controlled our policy thinking, but also our direct military intervention. It provided a check and balance between two world powers. With the fall of the Soviet Union, we drift between enemies. The War on Terror was really very nebulous and without a face. Saddam Hussein became the face of terrorism and made a good enemy, but now that he’s gone we search for a new one. Ironically it is Iran, a country that we made stronger by removing the Saddam threat to their country.

Pillar examines American thinking and links our past views to the present. America’s view are different because of our location and resources. These two things alone have allowed us to become a power and formed our unique view of the world. An interesting study of American policy.