Book Review — Five Rising Democracies: And the Fate of the International Liberal Order 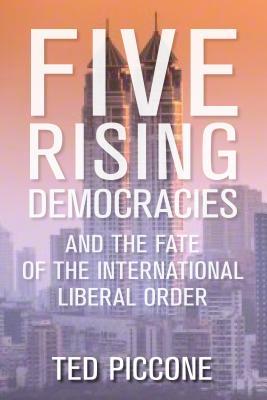 Five Rising Democracies: And the Fate of the International Liberal Order by Ted Piccone is a study of five countries that have made or in the case of one nearly embraced a democratic system of government. Piccone is a senior fellow in the Project on International Order and Strategy and Latin America Initiative in the Foreign Policy program at Brookings. His research is focused on global democracy and human rights policies; U.S.-Latin American relations, including Cuba; emerging powers; and multilateral affairs. Previously, he served as the acting vice president and director of the Foreign Policy program.

The American public, in general, is fickle about democracies in other countries. We tend to believe in what we want to believe. Many believed that Kuwait was a democracy in the first Gulf War and needed our help to return to democratic rule. How many times have Americans cursed France for acting in its interest instead of ours? Russia is a democracy only when it does something we like. Many people saw no problem in overthrowing democratically elected governments if they were too far left. We cheered Yeltsin in the fall of the Soviet Union, but now have Putin in something that is a deep perversion of the idea of democracy. What does it take to become a democracy? It has to be more than the definition I learned in grad school of a simple, peaceful transition of power.

The international liberal order is the idea that democracies do not go to war against each other. They support the same core goals of guaranteed freedoms and human rights. It is a system that believes democratic ideals are not only shared by all, but with the same vigor. Piccone chooses five new democracies and shows that there is a difference and in many cases countries, democracies or not, act as historically expected — in their own interests.

Looking at India, Brazil, South Africa, Indonesia, and Turkey Piccone gives the reader a wide variety of historical and cultural developments of democracies. It is nowhere near the one size fits all process. Brazil and Indonesia both became democracies after military dictatorships. South Africa made a huge transition socially and politically after apartheid. Indonesia and India have tremendous cultural and religious diversity inside their borders. Turkey struggles between the secular and the religious. That is perhaps the most difficult situation when a country shifts from secular rule to religious majorities in government. Iran experienced that in its revolution and it was devastating to many.

The world is a complex place and countries’ interactions with the world depend on more than the idea of shared values. These five democracies had little difficulty in condemning the Libyan government’s abuses to its own population but were hesitant to support the use of force or commit themselves to the struggle. In Syria, until very recently, Turkey chose to stand on the sidelines and allow Russia to intervene in Syria because Russia provided the bulk of Turkey’s natural gas.

Piccone looks at each country and examines its role and priorities on the international stage. There can be little doubt that democracy* is the fairest form of government, but does it always work as others intend it to is another question. Democracies can disagree with other democracies and often do. Democracies are themselves diverse in their histories and their priorities. America was a democracy that twice thought it was not in its interest to fight European wars, only to be dragged in later. Can Brazil be blamed for not wanting to commit to military involvement in Libya? Can other nations be expected to act against their economic interests to support grander ideas? Five Rising Democracies is an excellent look at democracy in the post- Cold War world.