Book Review — The China Triangle: Latin America’s China Boom and the Fate of the Washington Consensus 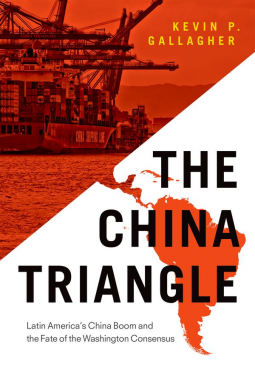 The China Triangle: Latin America’s China Boom and the Fate of the Washington Consensus by Kevin P. Gallagher is a look at the little-discussed expansion of China’s economic power into Latin America. Gallagher is a Professor of Global Development Policy at Boston University’s Frederick S. Pardee School of Global Studies, where he co-directs the Global Economic Governance Initiative and the Global Development Policy Program. He is co-editor of the Review of International Political Economy and writes regular columns inThe Financial Times and The Guardian.

There are several topics discussed in this book that are overlooked and often ignored in Latin American politics and economics. First is the resource curse. Countries that have an abundance of non-renewable natural resources generally have less economic development. This has been a curse of Latin America since independence. Even countries like Saudi Arabia are feeling the pinch of being a resource economy when the price of their export product falls. Latin America has a history of selling its resources instead of developing industry. Even with renewable resources, Latin America traps itself. Coffee exporting countries counter falling coffee prices with increased production which further drives down prices.

The Washington Consensus is a set of ten points or policies that are used to approve aid to countries. They include among other points, privatization of industries, direct foreign investment, redirecting public spending, and relaxing import restrictions. This has become US police since 1989. The problem is that has not improved the situation. Privatization has decreased the efficiency of many state industries or turned them over to foreign control where profit is the goal instead of bettering life. Trade liberalization destroys local industry rather than help it. Spending on infrastructure is redirected leaving road, rail, and public works projects unfunded. This leads to problems of continued debt, regardless of development.

Enter China. Needing to resources to grow its industrial economy China has been forming alliances around the world. China’s involvement in Africa is well documented and has been news for some time. China trades infrastructure development for raw materials. African nations have roads, railways, harbors, and the industry to export natural resources. There is improvement for some; others stagnate. China also brings in its own labor for many of its projects displacing workers in the original industry and not providing employment in infrastructure development.

China’s efforts in Latin America went largely unnoticed by the US as it was concerned with the War on Terror and Latin America was not harboring or supporting terrorism. China was able to move in and provide an alternative to the Washington Consensus. Many states accepted China’s help and Gallagher examines the results of the relationships. Some states were helped and were hurt. Mexico is a noted state hurt by Chinese investment in Latin America. Despite NAFTA, Chinese factories in Latin America can undersell Mexican imports to the US.

Gallagher provides the history and the economics of both US and Chinese investment in Latin America. The results differ by country but breaking the “resource curse” has proved to be a difficult undertaking. Also examined is how the US allowed another (economic) power to move into its backyard without sounding the alarm. An excellent read in the field of international relations and economics. Not everything happens with bold, headline-making news. Sometimes the important events happen with little notice.