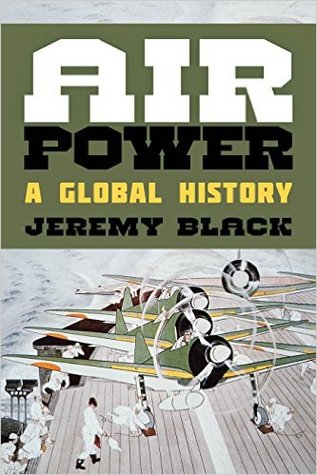 Air Power: A Global History by Jeremy Black is a comprehensive look at the history of military air power. Black graduated with a starred First from Cambridge, he undertook research at Oxford and has subsequently been Professor of History at the universities of Durham and (since 1996) Exeter. He has been Editor of Archives and a Council member of the Royal Historical Association, Black is a prolific lecturer and writer, the author of some 60 books

I found this history to be a rather stand out volume in the history of air warfare. Black covers the traditional subjects of the great wars, but he goes into great depth in lesser known conflicts. Air power was the 20th-century gunboat diplomacy delivering maximum impact with minimal involvement. The so-called inter-war period between World War I and World War II is rich in aviation history. Development aircraft and tactics blossomed in aerial warfare. The United States used aircraft in close ground support in Latin America. England and France used air power in the Mandates. The Soviet Union also concentrated in close ground support. The Cold War is also rich in air power outside of the obvious Korean War and Vietnam.

Interesting too is what is sometimes overlooked. The Berlin Airlift is perhaps the most decisive use of air power delivering 2.3 million tons of supplies in over 278,000 flights. The airlift was delivering more supplies than the previous rail deliveries. So impressive was this demonstration the Soviet Union ended the blockade. From 1952 to 1960, 45% of America’s defense spending went to the air force at the expense of the other services. The creation of NATO also unified airpower in the organization with member countries supporting the same military structures and command.

Particularly, interesting to me was an examination of the effectiveness use of air power in the Korean War for tactical and close support for ground forces the Marines were rated as the best while the air force was rated as the worst. Perhaps this is what prompted Lt General, Chesty Puller to say “The mail service has been excellent out here, and in my opinion this is all that the air force has accomplished during the war.” The air force did, however, rank first in strategic bombing.

Black covers the history of air power from balloons to drones and presents often overlooked information in the development of air power as well as its successes and failures. For example, Argentina used its air power to sink six British ships and damage eleven others in Falkland Island War. However, America’s copious bombing of the Ho Chi Minh trail did little to stop the bicycles and foot traffic delivering supplies. A very detailed look at the history of air power in a surprisingly short book.