Book Review — The War of Words 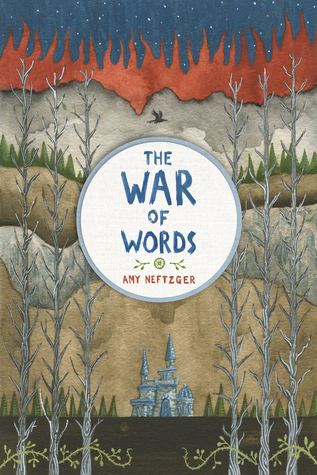 The War of Words by Amy Neftzger is a fantasy novel written for middle school aged children. Neftzger received her bachelor’s degree from the University of North Florida in Jacksonville, Florida and her Masters in Industrial/ Organizational Psychology from Middle Tennessee State University in Murfreesboro, Tennessee. She has written on a variety of subjects and levels and is also an occasional drummer in a band.

I “met” Neftzger sometime ago on Twitter and have been following her work. Even though children’s books usually don’t make it into my reading pile, I let this one in. When I was looking at NetGalley last month I noticed this book’s description and was immediately interested only then did I notice the author. Fantasy reading was something I did in my late teens and early twenties but have not been back to the genre in many years, but occasionally feel nostalgic.

The story is well conceived and Neftzger skillfully plants a few morals and lessons in the story. These ideas are stealthy hidden just below the story line and are not imposing or heavy-handed — tools are not good or evil, it is how they are used or the virtue of language and its evolution. These ideas are easily grasped by the reader without realizing it. Although there is a war being fought, it is not graphic or overly disturbing for younger children. The war is part of the setting rather than the center of the story.

The characters are well done and occupy one of four groups. Kelsey is a leader in the war against shadows, she is a strong and dedicated character who has some doubts about her own abilities. She also has to deal with an experienced, very conventional general. There is a group of colorful characters who represent the king which include a snow leopard and a fox who dresses much like “Puss in Boots”. We meet the evil sorcerer, a master at using words, and his army of shadow warriors. Finally, there is a group of researchers and a spell caster. In this last group is also a character (who in real life makes his rounds on Instagram) Newton, the gargoyle. Newton’s role also keeps the story lighter and breaks the tension. As with the violence I mentioned above, the character relations are all friendship building rather than romantic keeping this book appropriate for the intended reader’s age.

As the title suggests, words and word meanings have much to do with the story along with language itself. There is plenty of wisdom for a young reader to gain from the characters as well as a little milkshake advice from Newton. I am impressed at how well this book delivers its messages wrapped in a fantasy story. Although written for children it is also a delightful read for adults who are young at heart.

One response to “Book Review — The War of Words”