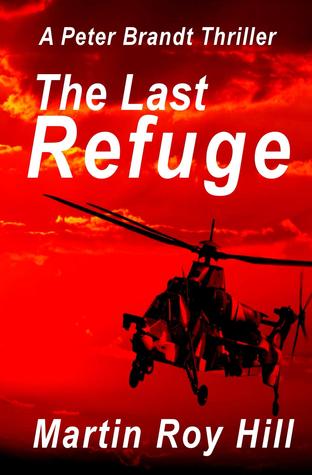 The Last Refuge by Martin Roy Hill is is a throwback novel to the genre of Cold War spy stories set in the post-Cold War world. Martin spent more than 20 years as a staff reporter and editor for newspapers and magazines before becoming a military analyst specializing in battlefield medical operations for the Navy. His freelance work and short stories have been widely published. I have read and reviewed two of Martin’s previous books Duty and The Killing Depths.

The story starts with a friendly fire accident in the First Gulf War and ensuing wrongful death lawsuit concerning a civilian engineer. Freelance reporter, Peter Brandt, is asked to investigate the lawsuit for a friend. Brandt, himself, is no stranger to war. He has reported more than his fair share of the tragedy that war brings. In fact, he is haunted by it.

The Cold War is over and even with the Gulf War, the military contractors are starting to feel the pinch and looking to survive in the world system. The Reagan Era military spending is a thing of the past and companies are laying off engineers. Engineers who are being laid off are having difficulty adapting years of missile guidance design experience to civilian projects. The military is feeling the pinch of the “peace dividend” as ranks are being cut and career officers are finding themselves forced out. Saddam Hussein, no matter how villanized, is no match to the former Soviet Union when it comes to deterrence and military spending.

The stage is set for covering up the wrongful death lawsuit. Peter Brandt finds himself in the middle of a collapsing industry. Brandt is no James Bond and this is a story of intrigue rather than over the top action adventure. Brandt must use his experience and wits to find out who he can trust if he wants to survive and let alone get the answers he is after.

The plot is realistic for the genre and even possibly for real life. The Pat Tillman cover up and a long list of friendly fire deaths from Afghanistan and Iraq prove that it is too frequent of an occurrence. Defense contractors found being less than diligent has been all too a common occurrence in the past. I remember, as a Marine, being asked if I trusted my gear and being told, “Remember it was built by the lowest bidder.” Of course, there are the military and government agencies needing to prove their necessity to ensure continued funding. It is a complex, but realistic, mix that Brandt finds himself in.

I usually don’t read contemporary fiction, but this is the third book of Hill’s I have read. His writing captures an era that resembled a chess match between powers rather than the fast pace of the current era of “Generation Kill.” There is a strategy in the writing that makes it appealing to those who want to read a gripping novel in a realistic setting. The story moves at a quick pace and will keep the reader turning pages and never knowing the complete story until the very end. Very well done.