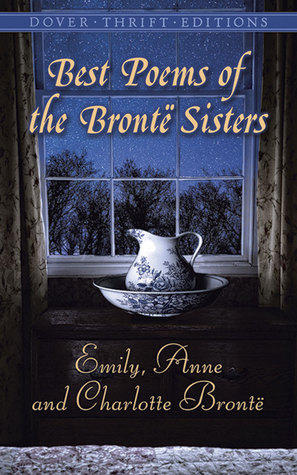 The Best Poems of the Brontë Sisters published by Dover Publications is a collection of poetry from the three sisters best known for their prose. Although classics Jane Eyre, Wuthering Heights, and The Tenant of Wildfell Hall they do not complete the sister’s range of works.

There is a similarity in style between the sisters and it holds to the form of 19th century English poetry. There are several poems that were written on the spur of the moment. Poems are written on a windy afternoon or from a place in the woods. There is, without a doubt, plenty of the romantic movement in their collective writing.

Emily Brontë’s poems seem to take a darker tone than the other sisters, but it is Charlotte who writes the poems in eulogy for her sisters. There is a turn in Charlotte outlook as she seems drained and suffering loss in her later poems. This is a well-collected selection of poetry that demonstrates the best of 19th-century writing and, more importantly, the works of women in poetry. Ask most people, even those who took English literature in college, to name a 19th-century female poet and perhaps they may mention Mary Shelley but little mention of anyone else. The Brontë sisters, although famous for their novels, should have their fair share fame for their poetry.

This is a great collection for those interested in poetry. English 19th-century poetry is almost the ideal of poetry in most people’s minds. This collection will introduce readers to a great period of literature and great women poets.