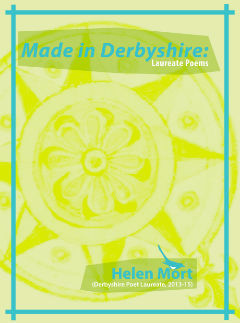 Derbyshire is a county in the central part of England. It is rich in minerals and home of Rolls Royce. But more importantly, it is the home of a poet, who happens to be the poet laureate of the county. Helen Mort’s first collection of poems Division Street and her other publication A Pint with the Ghosts tell of a poet with deep blue-collar roots instead of an ivory tower attitude. I described A Pint with the Ghostsas Bruce Springsteen lyrics sung by Stevie Nicks — there is a beauty in the grittiness of life.

I first heard of Made in Derbyshire: Laureate Poems on Twitter, having been waiting to see when Helen Mort was releasing a new collection. The Derbyshire post was about a book signing event for this collection. I asked if there were copies available for sale outside of the UK and was happy to hear I would have a copy in the mail shortly. I was told that this was a collection of mainly commissions by Mort and was a publicity project for Derbyshire, and perhaps not what I was expecting after Division Street.

This short collection comes with an introduction which explains its purpose. Anyone who has studied art or history knows that many painters survived on commissions from patrons. One wonders how difficult it was for a portrait painter to paint a portrait of a person they had no previous interest in. The accurate portrayal of a person is the task and it would seem rather routine. But, for a poet, it seems like a more difficult task to create more than just a picture of the subject, but build with words and imagery something that is multidimensional and personal. If that is not difficult enough, how about a poem for a tea towel? A football team? A friend’s new house? Mort is more than up for the task. You can tell there is an effort in her work that pulls together poetry on a subject in other times she would not be writing about. One thing I greatly admire about her work is her sense of history. Her poems in an earlier collection give the impression of first-hand observation of the coal miner’s strike, which actually happened before her birth. In this collection, she writes a poem for the rededication of a recreational area on the 100th anniversary of the first world war. “Sonnet of Summer 2014” is a response to “Sonnet of Summer 1914” reflecting on the Great War. Her sense of history is commendable along with her writing.

Other poems in the collection reflect the true meaning of poetry. The spreading of the art. There are poems from the children of Derbyshire and poems by others (with a little help from Mort). Here, Mort does what so important, she involves herself in the community and teaches the art of poetry– not always in a formal sense but seemingly in an open and friendly manner. From the poems written by others, there is a growing appreciation of poetry in Derbyshire. I sit here in Dallas, Texas and wonder have the Cowboys ever commissioned a poet? Does Texas have a poet laureate? (yes) Is poetry alive and growing in Texas? in America? Sadly it seems we like ad jingles more.

Made in Derbyshire was published for Derbyshire and it’s equivalent to a chamber of commerce. It was not intended for widespread distribution especially halfway around the globe. I reading the poems as someone who has not been to Derbyshire or the UK for that matter, I can feel the warm, welcoming, conversational tone in the poems. The link to a distant county across the ocean is clear established. There is an emotional attachment when reading these poems — a smile mostly. I doubt many readers here will be dropping by Derbyshire anytime soon to pick up a copy, but Division Street and A Pint with the Ghosts are available. A new collection of poetry will be published this year – –No Map Could Show Them — and an unnamed novel. Mort is definitely worth the read for those who love poetry and those feel a bit intimidated by poetry.