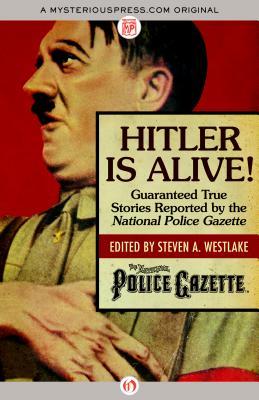 Hitler Is Alive! Guaranteed True Stories Reported by the National Police Gazette edited by Steven A. Westlake. The National Police Gazette was a publication that began in 1845 and ran into the 1970s. It was unique for its time being a jack of all trades publication and one that was likely to be hidden behind the counter or asked for. It covered sports, mainly boxing, crime and violence, scantily dressed (for the time) women, and fictionalized news stories. It was Maxim, True Detective, Sports Illustrated, and The National Inquirer all rolled into one.

This is a collection of all the Hitler is alive news stories from the magazine. How does a magazine run a collection of stories about Hitler being alive and not be taken as pure fantasy? The trick is a common one. Start with a bit of fact and a lot of conjecture keep repeating these ideas and let them build in the reader’s head. A few weeks later run another story building on the first with an “from what we learned in the last story…” type of lead in helps establish the “facts.” There are also conspiracy stories laid in as well as factual information (Mengele hiding out in South America until his death) to create some legitimacy. A few weeks ago a colleague was telling me about the Nazis building an Antarctic base before WWII. That story makes it into Hitler Is Alive with much more detail like fertile soil under the ice, a large bunker with supplies for 20 years plus farming equipment. Using special steel able to withstand the Antarctic temperatures the Nazis built an insulated self-sustaining bunker. This is where the living Nazi leadership hid… or in South America.

This was a fun read and story although totally fabricated was held that possibility that it was believable in the way the way the X-Files is believable or that a congressman will believe and quote “The Onion” as a source. A fun romp through a history that never was.