Book Review — Philosophy in the Hellenistic and Roman Worlds: A History of Philosophy Without Any Gaps, Volume 2 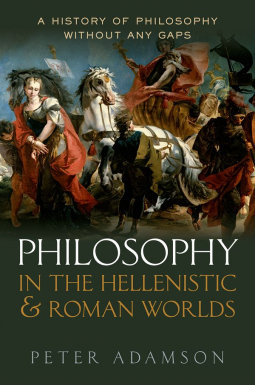 Philosophy in the Hellenistic and Roman Worlds: A History of Philosophy Without Any Gaps, Volume 2 by Peter Adamson is a detailed look at the philosophers of the Greek and Roman Era. Adamson holds a joint appointment with the Ludwig Maximilian University of Munich. Previously Professor of Philosophy at King’s College, London. He has published on Aristotle, Plotinus, al-Farabi and other members of the Baghdad School, Avicenna, and Averroes. A special focus of research is the output of the translation circle of al-Kindi, on which he has written The Arabic Plotinus: a Philosophical Study of the “Theology of Aristotle” and Great Medieval Thinkers: al-Kindi. Adamson is also editor or co-editor of several books.

In graduate school, political philosophy was taught by a newly minted Ph.D. with a dissertation on Kierkegaard. I enjoyed the class immensely mostly in part because my project that semester centered around Machiavelli’s Discourses on Livy, which I read and reread several times as an undergraduate. Others were not so confident with Hegel, Kant, and Nietzsche. The thought of philosophy puts fear into many students. Plato, Aristotle, and Augustine can be intimidating, but Adamson does a remarkable job delivering the message of the Greek philosophers through the early Roman Christian philosophers.

Adamson does not give the reader a “philosophy for dummies” course but explains in uncomplicated detail more than just what the philosopher said, but his influences, worldview, and how it all ties together. He compares himself to a cover band for each philosopher and it makes sense. To be a KISS cover band, you need to do more than play “Hotter Than Hell,” you need the makeup, costumes, and the fire breathing. It’s the complete picture that makes everything work. Adamson, also, isn’t afraid to use his sense of humor and plenty of puns (obvious and not so obvious). The reader will now he is in for a treat with chapters titles “We Didn’t Start the Fire” and “Like a Rolling Stone.”

The Greek period covers, my favorite, the Cynics, the Stoics, the Skeptics, and the Epicureans. The Cynic Diogenes was the a man who told Alexander the Great, that he was blocking his sun and needs to move. He was also the man who traveled with only a stick, a pouch, and a cup for drinking. Once he saw a young boy cupping his hands to drink and decided not to be outdone by a child, he threw away his cup. However, there is one area where his minimalism didn’t come into play — education, “The foundation of every state is the education of its youth.”

I found the Greek philosophers far more interesting than the Romans, but there are interesting aspects of the latter especially when Christianity is introduced into the mix. I found that one of my favorite paradoxes is mentioned — that of an all-knowing God and free will. Perhaps one of the most important philosophers of the period was Augustine is discussed in detail. In the Pagan era, there is coverage of Plotinus and Porphyry.

Philosophy in the Hellenistic and Roman Worlds is a great introduction, or review, of the philosophers of the era. It is very well written and presented in a welcoming way and there is more than enough detail for those with some background in philosophy without being intimidating to those without previous knowledge on the subject. Adamson writes in a conversational tone that makes the reader feel they are being spoken to rather than spoke at. A very well written book in both subject matter and readability. I look forward to future volumes covering the Medieval and Enlightenment philosophers.