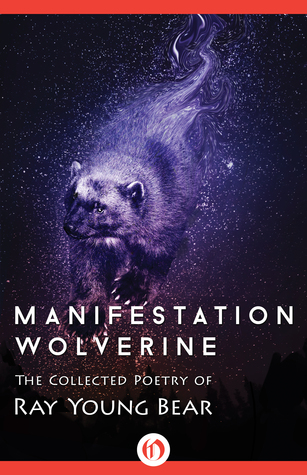 Manifestation Wolverine is a unique collection of poetry in as far as my reading has taken me. I associate Native America with great stories rather than great poetry. This collection does have the expected people of the earth and nature poems that one would expect, but it is much more than that. Ray Young Bear in many places radiates a righteous indignation with his and his people’s standing in life. I did see some John Trudell emotion in his writing even though Young Bear is at least a decade past the height of the American Indian Movement.

Young Bear also captures some of the problems in modern native culture with alcohol becoming a reoccurring theme. Guns play a role for protection and violence. Suicide rears its head in poems too. Suicide among Native Americans on reservation averages three times higher than the national rate. Some reservations the suicide rate is ten times the national average. There is a certain darkness that haunts life, but it seems to be offset by nature and animistic beliefs. One wonders if further removal from the modern world would bring more peace.

The collection is varied in verse and style with all the poems written in free verse. The poems tend to tell stories in a traditional sense but are wedged in a different style to fit into the world outside the Native American. Perhaps it is an attempt to tell the world that Native American culture is as relevant as any other in America. This can be more clearly seen in the poem, “In Disgust and in Response to Indian -Type Poetry Written by Whites Published in a Mag Which keeps Rejecting Me.” I did mention righteous indignation before.

I had a bit of difficulty with this collection. I am a fan of John Trudell and his writing but even with the many train references in his work Young Bear’s poetry did not grab me in the way other poetry does. I can, however, appreciate the work and the emotion and history put into the work. This will be a collection I will read again, hopefully from a slightly different mindset, and gain more from his work.