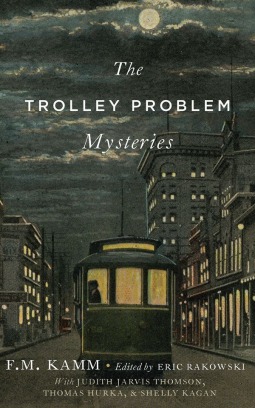 The Trolley Problem Mysteries by F.M. Kamm takes a very deep look at a seemingly simple scenario and exposes deep reaching philosophical questions. Kamm is an American philosopher specialising in normative and applied ethics. Kamm is currently the Littauer Professor of Philosophy and Public Policy at the John F. Kennedy School of Government at Harvard University and Professor of Philosophy in the Faculty of Arts & Sciences at Harvard. Before joining the Harvard faculty in 2003, she was on the faculty of New York University and also worked for the World Health Organisation as an ethics consultant. She is a fellow of the Hastings Center, an independent bioethics research institution.

Suppose you are driving a trolley down a hill and find that the brakes are not working. You are heading directly towards five unsuspecting people who will be killed if you do not divert the trolley. On the only available side track is one person. You will not be able to avoid hitting that person if you chose the switch to the side track. Your choice is limited to one person or five people dying. The simple choice would be to let one die rather than five. In the same line of thought, suppose you are a doctor and by removing the heart, lungs, kidneys, and liver from one person you can save five people. Suddenly, one dying does not seem as right as saving five. What is the difference in the two thought experiments?

Back to the trolley. Perhaps you could throw a person fat enough to stop the trolley under the wheels. Is that the same as choosing to switch tracks or is that simply murder? In that same line of thinking as the driver, you are not responsible for mechanical failures that in this case will kill five people. However, your decision to switch tracks does make you responsible for the life of the person on the side track. A simple decision is far more complex when it is scrutinized.

Deep scrutiny is exactly what The Trolley Problem Mysteries is about. Kamm explanation is met by three other philosophers. Individually each makes their own interpretations of the dilemma and Kamm returns to defend her position and provide criticism. Judith Jarvis Thomson, Thomas Hurka, and Shelly Kagan take part in this debate. The simple decision of which track to choose spirals into complexity as side theories and corollaries pull the reader deeper down a rabbit hole.

A fascinating read where simple answers are not always so simple. What makes one decision right and another wrong? Can four philosophers agree that changing to a side track is the right answer? Is utilitarianism, the greatest good for the greatest number, always right? Why do answers change in different but similar situations? The Trolley Problem Mysteries is a book that will keep the reader thinking long after he or she has finished reading it.