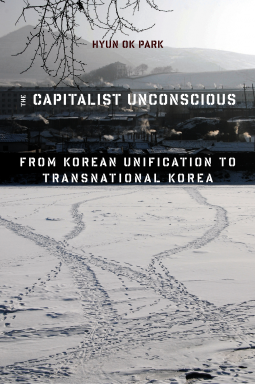 The Capitalist Unconscious: From Korean Unification to Transnational Korea by Hyun Ok Park is a book heavy in language, theory, and (I can only call it abstract) thought. Park is an associate professor of sociology at York University which she joined in 2007 after receiving PhD in sociology from the University of California at Berkeley and teaching at New York University. She has written widely on global capitalism, transnational migration of Koreans, Japanese empire, democratic politics, and the issue of comparison and comparability.

This is a difficult book. The language is intimidating even for a person with an advanced degree. There is the inclusion of political theory and the author’s own political beliefs:
South Korea is/was a military dictatorship that oppressed its population.
The North is the model of self-sufficiency.
China lost track of its revolution.

Indeed, the south has had it’s problems and has recovered nicely. Is there mistreatment of Chinese Koreans? I don’t know, but would be surprised if there was not. It is common in almost every society that minorities are not held as the equals of the majority. That has little to do with capitalism or communism. The North has many problems conveniently ignored by Park. Inequalities of labor and value are dismissed as corruption and dishonest low-level capitalism. The heavy industry self-sufficiency of the north was funded by Sino-Soviet aid and not the miracle of the Kim Il Sung. When the Soviet Union fell North Korea lost its subsidized imports and loans. North Korea went into a tailspin complicated floods brought on by deforestation resulting in famine. Massive Gulags and the Kim cult of personality is not mentioned. The North’s military spending represents almost 23% of its GDP. South Korea’s military spending is 2.7% of its GDP. Even countries known for their military spending like China and the United States both rank about 4%.

Park likes to reference Zizek, Marx, and Kim Il Sung in her work her position of an unbiased researcher is critically compromised. One easily gets the feeling that communism would be Park’s preference, if it was not tainted by political corruption and crooked capitalism. I have can see Marx’s point in the period that he wrote. Rapid industrialization created exploitation of the people. Marx, however, was wrong in thinking that Capitalism would not bend to the will of the masses. Collective bargaining and the threat of revolution was enough to change the system. Kim Il Sung played a role in unifying the people against the Japanese, either in reality or propaganda, but his time is well over. Who would want to colonize North Korea today? German unification cost roughly $2 trillion and that was to bring a rather advanced East Germany to West German standards. The cost of repairing North Korea economically, psychologically, and environmentally would be astronomical.

I see the problems of unrestrained capitalism and the problems with planned economies. Most educated and honest people would. Park with selective sources and complex language creates her own little world. At first, I was hoping that I misunderstood what she was writing. I looked for reviews of this book and her previous book to see if I was wrong. I found none for this book which has been out for nearly a month and her previous work garnered nothing positive. I am sorry to say, but this book is one you can skip.