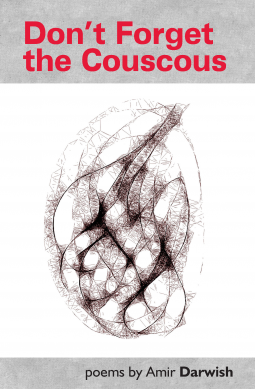 Don’t Forget the Couscous by William Darwish is the poet’s first collection of published poetry. Darwish was born and raised in Syria until the age of 17. In 2002, he moved to the United Kingdom where he became a tri-lingual interpreter and poet. He studied history at Teesside University and recently received an acceptance to commence a postgraduate course in international studies at Durham University, United Kingdom, which started in September 2014.

Darwish gives a fresh image at being Muslim that can be easily absorbed into the Western mind. The poems offer a wide range of settings from Morocco, Austrailia, Spain, The Danube, and the bedroom. He opens with an apology from all Muslims for what they have given to the world. The list includes coffee, navigation, astronomy, and even Rumi. His poems tell of the Arab experience in the West and the life he left in the Middle East. While expecting more of the witty attitude, Darwish quickly moves to human relationships:

Like Adam and Eve were the first two
We are the last two
Don’t go
Or else
There will be no more lovers left.

There are themes of drinking and livers, tears and eyes, love and breasts, and gazelles. Not what one would expect from poet rooted in the Middle East. This is an excellent first collection of poems that will open the reader’s eyes to another part of the world or another culture that may even be in their neighborhood. The verse is well done as the subject matter and character of the written lines.