Book Review — The China Boom: Why China Will Not Rule the World 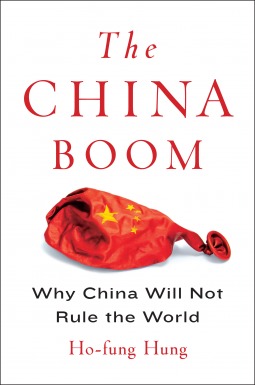 The China Boom: Why China Will Not Rule the World by Ho-fung Hung is a look at China’s history and its likelihood as a world power. Hung is an associate professor of sociology at the Johns Hopkins University and researches the development of capitalism, state formation, and protests in China and the world.

China is the boogie man in American contemporary culture. It has replaced Japan as the killer of the American dream in the 1970s and 1980s and the media feeds this fear. Claims from China developing a massive blue water navy to trying to set claims on the moon are frequent watercooler talk. What we do know is that China is the last country helping to support the North Korean regime. It relies on the US naval presence to keep its sea lanes safe. Talk of China’s huge military budget of $129.4 billion is dwarfed by the United States’ 571 billion in military spending. China is exercising its regional hegemonic powers where it knows it can make progress — Spratley Islands vs Tiawan. China is the second largest economy and expected to eclipse the US by mid century.

Hung spends a great deal of time explaining China’s history to explain the culture and its motives. His primary thesis is that China will not rule the world and the argument is convincing. Much of the argument centers on growth and economics. For those hoping for a more political and or power related explanation, there will be some disappointment. On the international development, China does not want to change the world order. It benefits greatly from the current setup. It’s military does not need to worry about power projection on the world stage. It is an export nation and it benefits from the current consumption based economies. Its development in Africa contributes to its access to resources and markets, and goodwill. It succeeds where India is failing — developed infrastructure, low consumption, and a large trade surplus.

Hung goes a long way at dispelling the rumors and myths of a China-centric future world. China will play a role in the world and a fairly large role. Its dependency on export markets and the US dollar will hold it in check and to a great extend keep the world order in place. One annoyance I found with the book was the use of in line parenthetical referencing citations. Most historical and political books use endnotes or footnotes. This book on the whole contains useful and well documented information and goes a long way in setting straight the role of China in today’s world and the limits of its future role.