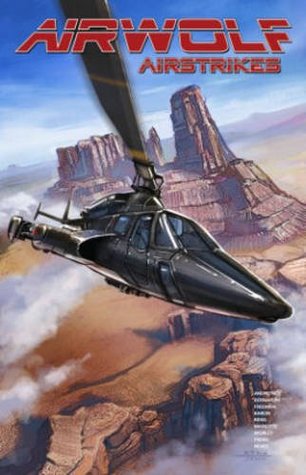 I remember Airwolf as a teenager. It’s over the top the action ranked it up there with other shows of the period like the Dukes of Hazzard. It was easy to recognize the impossible scenes but still had the viewer’s undivided attention. It was that 80s excess rolled into television. I was happy to receive the Airwolf Airstrikes graphic novel to review. I was hoping it would bring back some of my youthful memories.

Airwolf, the helicopter, is as awesome as it always was and updated for the new century. The regular cast is back, however, Santini no longer looks like Ernest Borgnine or Italian for that matter. Like the television, the graphic novel is big on action and light on story and as far-fetched as the original. The stories are all very short and really need to be developed. Flames and explosions can hold one’s attention on the tv screen but its very hard to do in print. This graphic novel does its best to pull it off, but it doesn’t pull through as intended.

I wanted to like this series, but it does not seem to translate well into the 21st century. In the age of drones, satellite surveillance, GPS pinpointing of locations, the helicopter loses much of its awe. Even the Marine Corps is starting to phase out helicopters. Airwolf is an admirable attempt to bring the series into the present, but the task may be unattainable. A good effort.