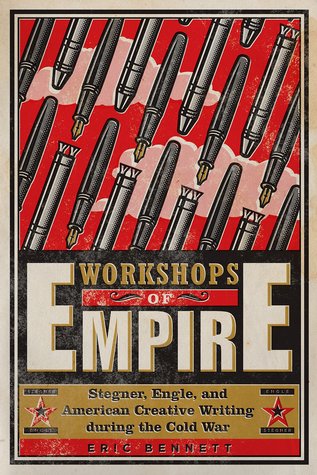 Workshops of Empire: Stegner, Engle, and American Creative Writing during the Cold War by Eric Bennett is a look at the expansion of American creative writing. Bennett is an associate professor of English at Providence College in Rhode Island. He is the author of A Big Enough Lie, and his writing has appeared in A Public Space, New Writing, Modern Fiction Studies, Blackwell-Wiley’s Companion to Creative Writing, The Chronicle of Higher Education, VQR, MFA vs. NYC, and Africana.

The Cold War was a changing point in American thinking. Gone was the idea of a collective society that pulled together to fight fascists and a return to the individual became prominent. Collectivism meant communism and communism was wrong. One only had to look at 1950s Science fiction movies to see this. Collectivism was evil and the hero always an individual who stood apart. Dr. Miles Bennell stood against a town of pod people in Invasion of the Body Snatchers. Steve McQueen stood alone against a town that refused to believe The Blob was real. Perhaps without noticing America rejected the collective identity and moved into individualism.

The other great change that materialized during the early years of the Cold War was education. The G.I. Bill put a college education within the reach of many who would not have attended college before. America had an educated public beyond the privileged class. With the rise in education, literature started to rise.

“In magazines large and small, reactionaries competed with radicals for the attention of well-educated readers.”
…
“America writers and intellectuals affiliated with that “vital center” believed that the complexity of literature provided an antidote to sloganeering amidst slogans run amok. No moreArbeit macht frei; no more Workers of the world unite! ”

Literary modernism grew out of the interwar period and gave rise to writers such as TS Eliot, Yeats, Joyce, who wanted to overturn the discipline of literary form. Stream of consciousness, unreliable narrators, and a mistrust of traditional power became the norm. Opposing the modernism was New Humanism championed by Irving Babbitt. New Humanism fought to capture the glory of the past in literature. The Great Depression, however, damaged the New Humanist movement as the country now saw failure in the ideas of the past and looked for help outside of individual responsibility. Like American politics, American literature was also trapped in a struggle between liberals and conservatives. Workshops of Empire highlights this struggle and the results in literature and the rise of creative writing at the university level.

Having a masters degree in political science puts me on the outside looking in on the role of creative writing, but leaves me on the inside as far as the history and the Cold War that influenced it. Workshops of Empire offered me an insight into the change in American writing, education and thinking based on concepts that I already understood but the effects I never noticed in writing. As a latecomer to poetry, I found this book enlightening and an explanation of how writing changed from Whitman to Eliot to Ginsberg to winners of the Iowa Poetry Prize.