Book Review — Prisoners of Geography: Ten Maps That Tell You Everything You Need To Know About The World 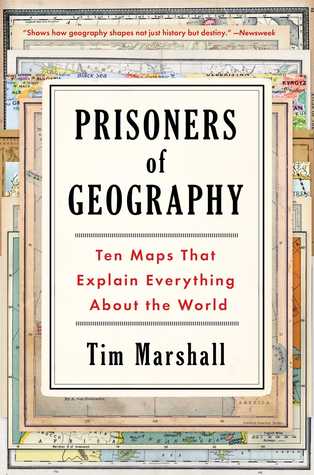 Prisoners of Geography: Ten Maps That Tell You Everything You Need To Know About The World by Tim Marshall attempts to explain the world by presenting ten maps of the planet. Tim Marshall is a leading authority on foreign affairs with more than 25 years of reporting experience. He was the diplomatic editor at Sky News, and before that was working for the BBC and LBC/IRN radio. He has reported from thirty countries and covered the conflicts in Croatia, Bosnia, Macedonia, Kosovo, Afghanistan, Iraq, Lebanon, Syria, and Israel.

If a picture is worth a thousand words, a map is worth a thousand pictures. A topographical map in the hands of a Marine is a volume of information on terrain, defensive positions, possible enemy routes, and the sense of knowing where you are, how to get where you need to be. It’s more than just a picture of the ground that others may see. Maps are important even in reading history. National boundaries become visible even if it’s not a political map. Mountains, rivers, deserts, and oceans created borders even before Europe drew lines on a map.

America and Russia sprawled until they met oceans. The Middle East existed without national borders. The Ottoman Empire didn’t arbitrarily divide land. Nationalism and conflict in the Middle East have much more to do with the artificial straight line borders drawn by France and England than historical boundaries, tribes, or religions. Countries develop to their resources and their limits. Russia is challenged by the lack of a true warm-water ocean port. China is creating alliances to gain what it needs with a stealthy military objective. Japan trades because it must; it lacks resources. Mountains ensure peace coexistence between India and China but not India and Pakistan. Natural borders offer security while political borders offer an avenue for conflict. China is boxed in between rivers, mountains, and jungles. Vietnam is the only country China has invaded in the last fifty years, but not from lack of want but practicality.

A map is a handy tool for understanding the world. Marshall takes maps of ten regions of the world and uses them to explain the political and cultural realities of the modern world. It becomes easy to see the problem areas and the limits of nations based on their geography. It also becomes apparent how countries are attempting to change their situations. Some countries live in the comfort of their situation. Mexico only needs to fear invasion from the US and Canada likewise; neither is expresses much concern over this. Other countries are not so lucky. South Korea’s capital Seoul is only thirty-five miles from the DMZ. There are no natural obstacles separating Seoul from an invading army from the north.

Prisoners of Geography is a nicely done work that provides a picture (map) and then goes on to describe the history, culture, and the political realities of the region. Most of the world is covered with the exception of Canada, the South Pacific, Australia, and New Zealand. The maps help explain the whys of many historical questions and actions as well as the present and possible future challenges. Prisoners of Geography is a very readable and understandable history and political study.

One response to “Book Review — Prisoners of Geography: Ten Maps That Tell You Everything You Need To Know About The World”