Book Review — An Arab Dawn: Arab Youth and the Demographic Dividend They Will Bring 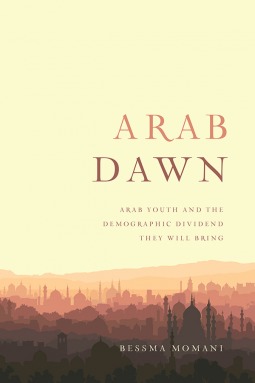 An Arab Dawn: Arab Youth and the Demographic Dividend They Will Bring by Bessma Momani is look at the current youth of the Middle East and North Africa. Momani is Associate Professor in the Department of Political Science at the University of Waterloo and the Balsillie School of International Affairs in Canada. She is Senior Fellow at the Centre For International Governance and Innovation (CIGI) and a regular media analyst and contributor to national and international media on the Middle East and on global economic governance issues.

I went to Saudi Arabia in the winter of 1984 to serve as an embassy guard. It was culturally a huge change from Camp Pendleton, California, and a confusing change as well. Waiting for the flight out of D.C.I met a Saudi air force officer and his wife and child. I had many questions and they were happy enough to talk to me. We were separated on the flight and once arriving in Jeddah I want to say goodbye and thank you. But by then both he and his wife were out of western clothes and neither had any more to say to me. Crossing into Saudi airspace had changed everything. It was like there were two worlds. I learned there was a private world and public world.

Today much has changed. I read about women defying the law and driving cars in protest. Young adult males forming hot rod car clubs. Perhaps, most surprising is a female Palestinian living in Mecca who Tweets to me on a somewhat regular basis in life in Saudi Arabia. All these things would have been impossible in the mid-1980s when I lived in Riyadh. There is a change in the Middle East and it’s being carried out by the youth. The younger generation is exposed to social media, satellite television, and higher education. Momani notes that there are more youths enrolled in universities in war-torn Palestine than in Hong Kong. Higher education is growing throughout the Middle East as public and private universities set up. There was a very real worry of brain drain in the 1980s as the youth left their home countries to study abroad and decided to stay.

In the 1970s, the Arab world was much different as governments tried to instill the idea of citizenship on a population not used to that concept. The 1960s and 1970s were eras of great growth and liberal experimentation that slammed shut in the 1980s. Now it is opening again as governments seem powerless to stop the flow of information and weakened against an educated, urban population. There is a growing demand for more freedom and still a clinging to religious values. The religious values seem to bring order to society without a need for heavy-handed government tactics.

The West seems to see only the negative aspects in the region. The old newspaper adage of “If it bleeds, it leads.” has found no shortage of blood in the Middle East. The west also finds symbolism over substance in its reporting. Ask an average American what the headscarf, hijab, means and most will say its religious oppression against women. Yet many women visiting or living in Western countries still chose to wear a head covering as a matter of choice and heritage. Even in the suburbs of Dallas, where I live, it is not unusual for women to wear a hijab, of course, it is much more stylish than the traditional black scarf. It remains a sign of identity. Women have been gaining ground in areas that do matter. Would most Americans know that the women outnumber men in Saudi universities?

Momani gives the reader an across the board look at the Middle East and the changes that are being generated by the youth. There is a move towards a more liberal lifestyle and openness in society. Many governments know that they cannot repress change without risking revolt as seen in Egypt. No one would have predicted that Saudi women would gain the right to vote or run for local offices. Governments that resist face internal revolt and in the age of Twitter and instant communications the government actions are no longer internal matters. The whole world bears witness.

There are still problems as the youth start moving into the job market and the countries are not set up for growth or have the industry that allows growth. To complicate matters, corruption and the “good old boy” network prevent many from finding gainful employment. Governments entry into world markets has slowed the previous price controlled and subsidized economies and required and created a need for an earned income. Prices in urban centers have risen and local vendors now must compete with imports. The people, in general, would rather visit malls and shopping centers than the old shops. Urbanization has brought its share of new problems.

An Arab Dawn sheds some needed light on the positive changes that are happening throughout the Middle East. The vast majority of the population wants basically the same thing as the Western world, although with an Arab cultural tint to it. Fast cars, McDonalds, and MTV are as much a part of Arab life as it is American life. Islam does not mean ISIS or terrorism, but the West will have to see what is happening beyond the sensationalism. An Arab Dawn is a great place to start in understanding the Middle East and the Arab world.