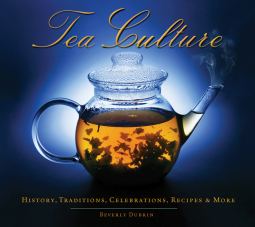 Tea Culture: History, Traditions, Celebrations, Recipes & More by Beverly Dubrin is a very readable and informative book on tea and infusions. Dubrin gives a history of tea along with its mythology. Unlike coffee houses in Europe that seemed to equalize the population, tea, on the other hand, separated the population between the rich and poor. Tea, however,  did seem to create a unifying factor in the American colonies as several “tea parties” happened in prerevolutionary America. It was also important enough commodity to trigger the Opium War between Great Britain and China.

Tea Culture also covers the production of tea and the processes that create the different teas — Black, Blue (oolong), Green, Yellow, and White. Along with true teas infusions are are covered including herbal and rooibos. Tea has grown in popular cultures across the world and is second only to water in amount consumed worldwide. Recipes included in the book cover several different cultural varieties of tea preparation. Tea Culture presents a nice introduction to tea in an interesting and readable manner. Recommended for those looking to learn more about a beverage that can be as common as Lipton or as intimidating as wine.